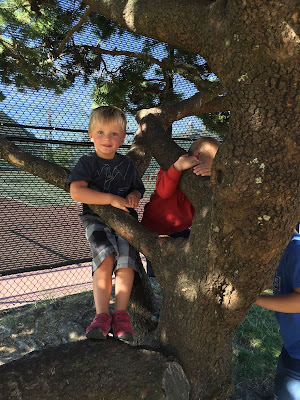 Small boy: "I think I'll try climbing like my sister.."

I could see it coming, but had hoped it wouldn't. It was the last morning of darling Cannon Beach, and breakfast was over. The children had all said their goodbyes and felt themselves at a loose end. And then, "Let's go for one last fling at the park, shall we?" said Grandpa. Grandpa was always happy at the park.

Even Grandma was happy there, now. She had become less and less agitated in that setting. Fewer and fewer frightened comments made it past her lips. It was just a matter of adapting, she thought. So, over to it we went, one last time.

The small girl's best friend, another tree-climber, was there with her father. We had daily seen them there so by this time, all of us were friends. The men had taken to meeting at the base of the tree, I suppose ready to catch small children as they dropped.

But wait...there were more small people now clustered beneath that tree. In fact, the three year old and his friend stood clutching its lower branches. Grandma wondered. They had never yet showed an interest.

"Oh, that's nice dear, let's move on over to the tire swing.." and Grandma started walking that direction.

He hesitated. "But, I don't want the tire swing," he sweetly called out in the direction of my back. "I want the TREE!"

And then I could hear Grandpa, cheering him on. "Hey, that's great! You can climb it, sure! Go right on ahead!"

I opened my mouth with a response, but something in the little fellow's delighted face stopped me. Like sister, like brother. They climbed in tandem, concentrating; doing their job.

Grandmas can sometimes be a one-woman Nanny State. It isn't very attractive to small children. Right then, this Nanny State closed up shop.

I moseyed over to the tire swing anyway. Nobody says Grandma has to watch. 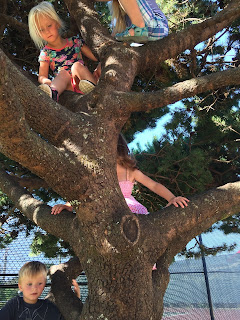 Posted by SconeLady at 8:20 AM