The year was 1972 and we had all decided to communicate together by way of cassette. It was a far, far different world than the one we now find ourselves in. Do all of my readers know just what it is that I mean by the word 'cassette'? Well, here is a photo of a stack of them, just in case: 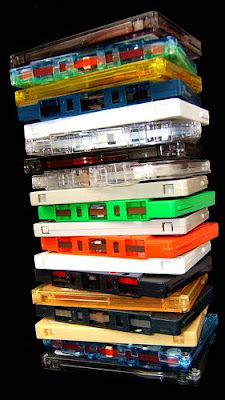 Cassettes have mostly now disappeared from the stage of this world, but back then they held center stage. The SconeLady (who was not yet the SconeLady, truth be told) was in New Zealand, and the rest of the family were scattered about in the various states of the USA. Letters were slow, but admittedly useful. Phone calls? prohibitive. So - what else should we do?

Cassette tape was deemed unique and fun; plus, I was so lonely in my hideaway down under that the human voices coming to me from over-the-sea would be immensely reassuring.

Long after this had been decided, and just when I thought it never would, the cassette finally arrived. The mail arrival was during our morning session break, and soon my name was being called. And there the package sat peering enticingly at me from amongst a pile of letters for everyone else. I could not yet listen to it - oh woe was me! - but I placed it inside my desk in the lecture hall, reaching in to touch it from time to time as I listened. The wait felt like torture.

But at last the lecturer concluded his final point, and let us out for lunch. I dashed to the dining room and consumed tomato soup, pikelets (tiny pancakes often eaten at lunchtime), scones (!) and white bread (did I tell you I gained a *stone while in New Zealand? Just sayin)'. 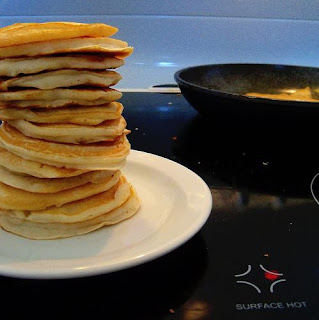 Back in my shared room, I inserted the tape into the cassette recorder, and pushed 'play'. There, for my amazed enjoyment and satisfaction were the voices of my sweet family members from thousands of miles northeast of this small room. The immediate reaction was one of tears.

"What is the matter?" said my concerned roommate.

I pulled out a tissue. "Oh - well, nothing is really the matter. It's just that my family sent me this tape and I am so completely happy to hear their voices.."

She nodded, and tiptoed out the door, to let me listen - and cry - in peace.

After all these years I cannot remember all of what I heard on that blessed tape. But one segment became lodged in my memory, never to escape. Two small nieces shared their own sweet selves with us, telling all about their experiences. Of huge importance was the fact that God was giving them "the food we need, and the money we need," along with the details of how He was doing all of this. They were only 2 and 4 years old, yet they knew from whence their sustenance came.

Then, they shared a song they had written after having heard the story of the Israelites worshipping idols they had no business worshipping. The girls were very impressed by this sad departure from God's clear instruction. Their voices sang their song for us in a minor key, which went like this:

They can't see and they can't hear
For they are dead and Satan likes them.
So never worship an idol!

This song was going along just fine until the next to the last line was spoken: "NEVER!!!!!" That part did not go so well, for one little girl sang it very very loudly into the ear of the other little girl. The offended girl lifted up her head and cried, "She screamed in my ear! She SCREAMED IN MY EAR!" and could not, or would not be consoled. The song ended in much confusion while their parents forgot the tape and attempted to heal the wounds - at which I laughed loud and long.

My roommate had returned just as the screaming began. "What on earth was that all about?" she asked.

I guess that about says it all. Around where I live you don't see people going about worshipping idols, per se'. We are all quite careful and private about it, right? Money, beauty, possessions and the like. So that song was actually pretty decent. But will it ever make the Top Ten list?