I don't care if it does have a fancy name - I don't like it. Trachelas tranquillus by any other name is still a SPIDER. 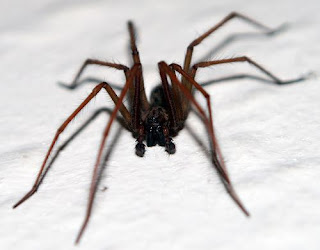 This one looks hideous enough, but isn't very interested in humans. I was happy to hear of this after I ran into one the other evening. The evening walk has been extremely pleasant this summer as the nailing heat of the day subsides. At that time, you can see people everywhere streaming out of their doorways with huge smiles plastered all over. This I did, on the evening in question. I was minding my very own business, thinking about fun travel ideas...when all of a sudden a spider with red legs let itself down from a tree right in front of my face. A split second later and it would have landed ON MY HEAD (I apologize to my sister for this visual picture).

It too had probably been minding its own business when along I came without warning. We both overreacted. It started wiggling around hideously not 2 inches from my nose, and I screamed, arms and legs flailing and jumping, and looking sadly ridiculous. It was at least 30 seconds before I could get it under control. Someone, somewhere, laughed.

With all the gyrating about, I became tangled in its line. All it wanted was to get either back up into the tree, or down to the ground where it could escape this creepy human lump. It wriggled fast, dear Readers. I cannot overemphasize this point. I finally lowered its line onto the ground, where the spider - I kid you not - jumped! Its hideousness could go no further, and so I made a mad attempt to squish it - but missed.

It scurried into the nearby grass, I scurrying in the opposite direction. There, I saw the person who had been laughing at this episode. It was actually two someones. They were several yards away, too far to see anything so small as that spider. Therefore, I realized that so far as they could tell, I had screamed and gyrated and flung my arms and legs in such a ridiculous manner - FOR NO REASON. They stared. "What was it?" said one.

"Yeah, what was it?" followed the other.

"Oh. Sorry for laughing," said the one.

"Oh yeah. Sorry for laughing," followed the other.

I escaped, unsure of which was worse, the spider itself, or the spectacle I had made of myself. It was almost as bad as the day I was speaking to a couple of 8th graders just outside our classroom door. These 8th graders had been bad, and were being reprimanded. Just as I was at my most irate, a passing seagull dropped a large glob of white you-know-what onto my glasses. The two bad boys saw it and howled with hysterical laughter, falling all over themselves and gasping for breath. The entire episode was viewed by all 33 other 8th graders, through the window.

Just imagine trying to get that situation back under control. It doesn't bear thinking of. Maybe the spider wasn't all that bad.

But, sometimes life just is not very fair. 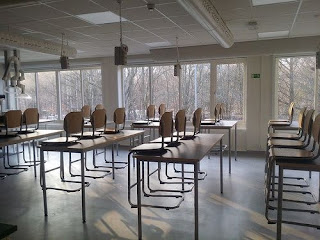