There must have been over a thousand still photos, and who knows how many video clips. The SconeLady was never without her iPhone, which was never idle so long as small children were about. Some of the adults took to asking, "Are you recording this?" when they saw me standing there in a certain posture. "Umm... yes... is that ok?"

As we all trooped along the sand toward Haystack Rock, the children began noticing the small, flat, round jellyfish that are carried in with the tides there. One of the youngest began picking them up. "Oh, maybe we shouldn't touch those.." said Grandma SconeLady. But he was clearly holding one of these creepy things right there, with no noticeable negative reaction.

"It won't sting me Grandma!" he said in full trust. "My sister said so. Don't worry!"

If only it were that simple.

By this time, all 7 of the children were paying attention to the offending creatures. They were everywhere. The little blond was collecting them up, in a great 'rescue' attempt. "Oh, my darling girl let's not pick so many up!" I intoned. "They get sick if we take them out of the water."

This had a temporary effect, but soon she felt so sorry for them that the 'rescue' continued. 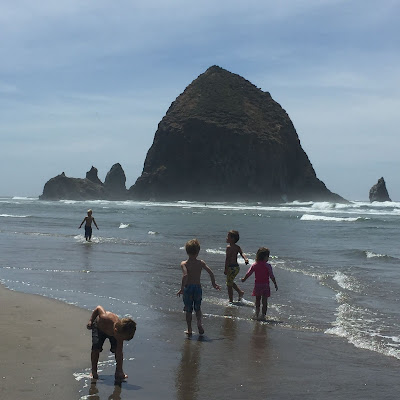 
But they were having so much fun that we finally decided to just let it all go. Creepy though it may seem to us, the heartfelt sorrow they felt for the 'jellies' was admirable.

And before I close this one off, I must point something out. Have you noticed anything funny about the above photo? About Haystack Rock itself, and what it might look like? The lovely daughter pointed it out last night: beginning from the left and working toward the right, you can see a strange looking man's head, nose, chin, belly, and toes - as if he has fallen asleep in the surf. The belly is Haystack Rock. Hahahaha! We all 'saw' it, and now we can see nothing else!

Today for the first time, I am trying to add video clips here - there are two, and I don't yet know whether they will 'play' when you click on them. Try it! I will, once I 'publish' the thing. I hope they do work, for they convey just exactly the freedom we felt on that loveliest of days, running and laughing and rescuing, all down the great expanse of Cannon Beach, Oregon.

You really must go! 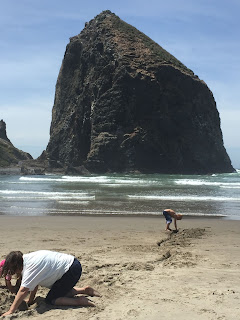 The SconeLady's sister, digging with the best of them