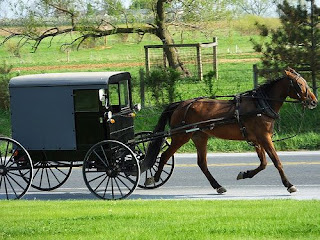 Small and large, young and not-so, everyone gathered out of doors. It was a mildly warm SoCal evening punctuated by the laughter and chatter of many. They had begun by eating a delicious dinner to give them energy for the task, and now all were ready.

Even the children held tools.

There was a huge and offending tree-bush to remove, and lots of friendly people to remove it. Word had spread of this need, and so they had piled into their cars and arrived at the Little Blue House. The whole thing reminded me a little of the groups of Amish who gather for a neighbor's barn-raising. Why pay a company to do something that can be done together? 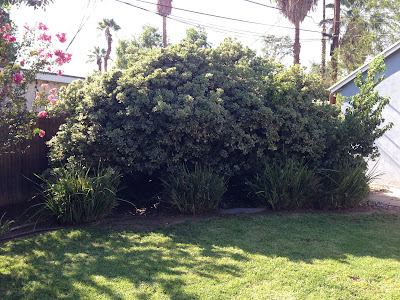 The huge and offending tree-bush. Before.

Probably the most intriguing part of all this activity was the important presence of children in it. They were very much a part of the team, and knew it. The grownups knew it too, and accepted/honored/thanked them. Perhaps no heavy tree limbs were actually cut away by these small helpers, and perhaps no thick roots were felled by their strength alone. But they lifted branches, put them into wheelbarrows, helped wheel them to the pickup bed, and hacked away at any number of rogue branches. It was all very satisfying. And purposeful. They were a part of something important. 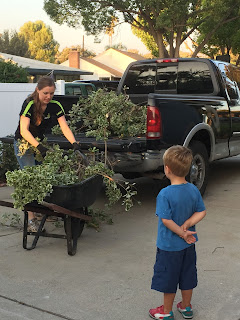 Because I am a Grandmother within this scenario, I was privy to a secret here: no one produced a video game or movie to keep the children 'occupied' and 'out of the way'. Not one. And I ask you this: which child is better off? -

a) a child who stays indoors for hours playing Grand Theft Auto and Minecraft, or

b) the child who spent those hours in the back yard hacking away at tree branches surrounded by hard-working and funny adults? 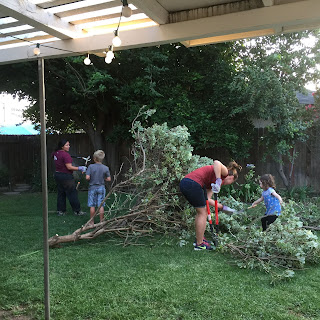 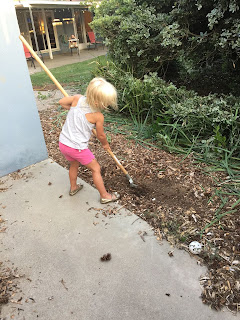 I'm pretty certain that had any of us suggested a video game, the children would have turned it down flat. Who'd want to be cooped up like that, anyway? 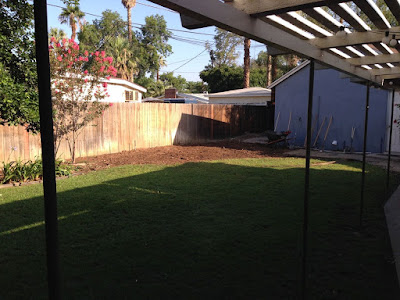 The neat and tidy corner. After. 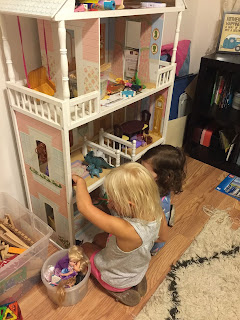 The SconeLady plays with two small workers while on their 'break'

At some point during the evening it became known that one of the helpers had a lot of pine needles building up in her own back yard. Someone said, Hey! we can come over and rake them with you! The lovely daughter and her 3 piled into their car this morning with their rakes, to do the job. The kids couldn't wait to get there. They know by now the meaning of the message, 'Bear one another's burdens, and so fulfill the law of Christ.' -Galatians 6:2.

Isn't that just grand? I can't think of very many more important things to teach children. And not just 'teach', as in 'tell' - but 'show' them; include them; incorporate them. You might be surprised at how happy they are to learn.

Sounds a lot better than being isolated with Assassin's Creed, don't you think? (whatever that is). 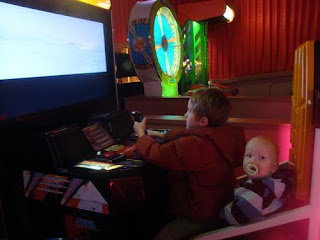 Posted by SconeLady at 5:35 PM