It was the smiles that did it - bright and happy, they were everywhere. And who wouldn't smile when faced with this? 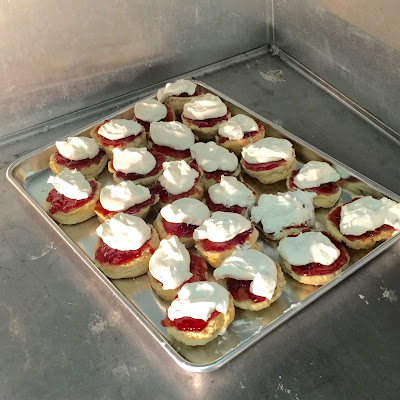 It was all luscious creaminess atop Rosie's Scones with lashings of strawberry jam, loose leaf teas ready and waiting alongside Panera Bread scones nestled in amongst the true British versions. Irresistible!

And thus went the morning.

Bright and early a team of faithfuls had appeared outside the community center wherein church takes place each week. A huge trailer pulled up and backed in. The pastor said a prayer for us all, sharing that we do what we do in service 'to the Lord Christ', and for others. It was the sweetest thing.

And then, we were off! People rolled in massive containers filled with massive amounts of things one needs for church and Sunday school. Strong husbandly arms carried in the 190 scones, the heavy mixer, the jams and thick cream, everything needed for a splendid Cream Tea. 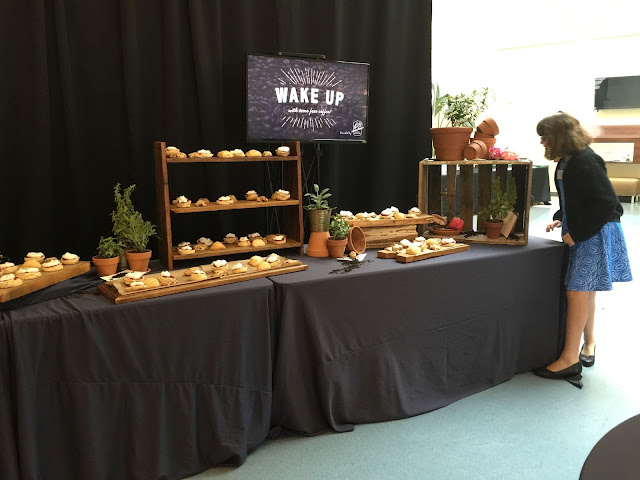 And then the work began. It seemed that as soon as one tray was whisked away, another one was needed. I was assisted by the valiant Carrie, whose smile lit up the kitchen and whose spreading skills made the job easy. And then, the energetic and enthusiastic eight-year-old arrived, becoming my especial helper and messenger.

"Run out there and see how many more they need!" I would cry. And he would run.

Soon a sudden shout came through: "Grandma! THEY LOVE YOUR SCONES and THEY WANT MORE!!!" And did we ever give them more.

There was for a time a lull in the activity, and my small companion and I sat companionably side by side, chatting (as is our wont) about anything and everything. But then, a holler through the service window requesting "MORE SCONES!" and we were off!

When everyone had eaten their fill and our duties were done, the six-year-old appeared, holding a lovely bouquet of Mother's Day flowers. "They're for you, Grandma!" she cried. There they all stood, the three darlings of my life, laughing and grinning up at me. However many grand moments that are still in my future, such a moment as this one will hardly be beat. "Thank you!" I said, whereupon the smallest of the three suddenly grasped my hand - and kissed it. 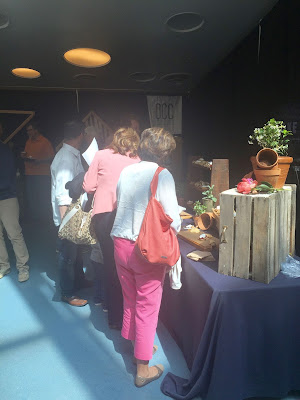 What can a person say to that?

As we were climbing into our cars, he piped, "Grandma? I don't like scones anymore."

"Because I ate so many that NOW I AM SICK."

Oh dear. I actually think a few of the men were having a similar experience. There was clear evidence that when it comes to English scones piled high with goodness, you can never really eat just one.

And so the day was, dear Readers, a massive feat. A privilege. Even a delight. All the same, it might be a while before I can face another scone. Enough is enough.

Posted by SconeLady at 9:15 PM No comments:

It is the night before the Big Reveal, and I am dangling here on pins and needles. eep! I  think it is the thought of getting them all into the car, and then into the church, and then into the kitchen, and then getting all the jam and cream organized and whipped and spread goo-ily on top of them that has me in the jitters. But with the gracious help of a team of lovelies, it will all happen. And I shall take pictures and share them with you, my dear Readers. Hooray!

Someone heard me saying that 190 scones were tucked away safely inside my freezer, and this someone stared at me in disbelief. "Woa. How come so many?" she laughed. "Isn't that a bit extreme? Isn't 10 about the normal batch?"

I know, it's just slightly shocking. But I love it. 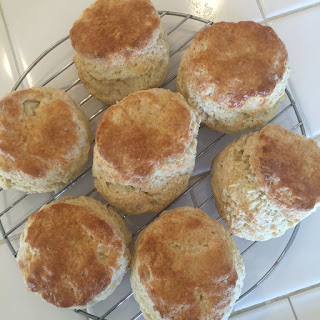 I love that a kind and generous pastor rang me up to see if I might bake some scones for Mother's Day. And I - of course - said yes. "Oh fun! How many, sir, shall I bake? How many, ah, people will be there, do you think?"

And it was lovely fun, but I almost could not stop baking them once I'd started. Even the SconeLady improves with practice.

The batch you see in the photo above is probably the 4th or 5th batch, representing the moment when I realized I had finally got it right. The size was perfect for splitting and spreading, and giving the recipient just the right amount of yumminess, but not too much. After this batch, I stayed with the strategy. The earlier batches were yummy too, but not quite so exactly perfect.


Would you like to try the recipe? Ok. Just for you, here it is -


Mix 4 cups self-rising flour together with
1/2 cup cold butter
(cut the butter into small pieces, and rub it into the flour
until the substance appears crumbly)
Add 1/2 cup sugar
Mix together 2 eggs + enough milk to equal 1 1/2 cups liquid
Gradually add the egg mixture to the dry mixture,
using a spatula.
You will soon need to use your hands to fully mix these ingredients.
Manipulate the dough into a round, and place on a floury surface.
Kneed the dough until it is no longer sticking to your fingers, adding
flour as needed.
Roll it out until it is 1 1/2 inches thick.
Use a 2" cookie cutter to gently cut your scones.
Whisk one egg with a little milk, and
Use a pastry brush to coat the top of the scones.
Bake in hot oven (425) for 13 minutes, or until golden brown.
Remove from baking sheet and place on rack to cool.

Hmm.. Well, I am still dangling here on pins and needles. But somehow it feels better, having talked it all over with you. (for I have missed you).


Posted by SconeLady at 8:54 PM No comments:

Mother's Day. It's the Sweetest Thing


It took 190 scones to get the SconeLady back to business. Have you ever baked 190 scones before, all by yourself? No? Well, I don't often indulge in such extremes, but it was so much fun that I will in all likelihood turn right around and do it again. 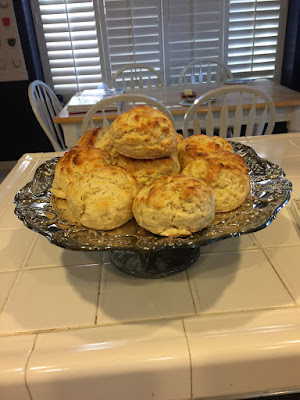 The people who will consume these 190 morsels are unaware that such a privilege is in their very near future. In fact, on Mother's Day. They will arrive at church on Sunday, and park their cars. They will walk through the big double doors of the building carrying purses, Bibles, and children, and then all at once they will come upon piles and piles of scones - simply scads of them, all beautifully adorned and waiting. And they will smile. It is this collective smile that has kept me baking up a floury storm all week, Monday through Friday. I can't wait.

But it has been an adventure. Friend Rosie was consulted by email immediately, because her scones are the last word in scones. And even though she was thousands of miles away in an exotic location riding camels in the desert heat, she gave delightful advice. Between the pair of us, we agreed that:

And so, dear Readers, my scones and I are poised, all ready for the Big Reveal on Sunday. What better way to honor our mothers than to ply them with the most satisfying, alluring, and delectable treats known to womankind?


Posted by SconeLady at 6:28 PM No comments: