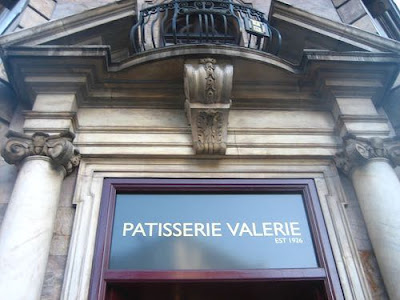 There was a Cream Tea yesterday, as you may recall. I found the Patisserie Valerie after having wandered around the town, seeking a suitable tea shop. This search was not a chore, as the late afternoon sun was warm and Bath itself was dreamy. I saw that the Royal Crescent Restaurant was open for business! but was not dressed very properly to enter its doors. I don't think I would have been refused, really, but I was shy to try - I'd read that they do enjoy their patrons nicely dressed.

And so, it was the Patisserie. In general, patisseries are attractive and tasty and do good things in a French way. I think this one did it well. I was greeted immediately upon entering, and shown to a wee table next to a cut glass window. This was charming, and within moments of placing my order, out came a loaded tray. Two scones and a pot of tea for one. 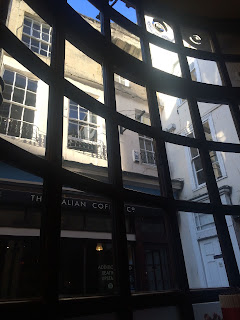 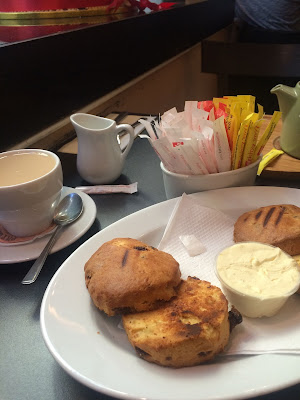 The stage was set.

The scones were split in two, and toasted, with currants in. Toasted is different from most scones I am served in the UK, but they actually had a nice taste. The tea itself was delicious (English Breakfast), and I drained the pot dry. My waitress was the sweetest and kindest lady who served me almost instantly, busy but hovering nearby just in case I might need something.

Having thought it over, I am going to give this Cream Tea a 7, my dear Readers. There was something about the toasted scones that just slightly disappointed the SconeLady. I didn't mind the currents so much, but would have liked to have the choice of plain. But tomorrow is another day, and perhaps there will be a chance to dine in the Royal Crescent! We shall see. We shall definitely soon see. 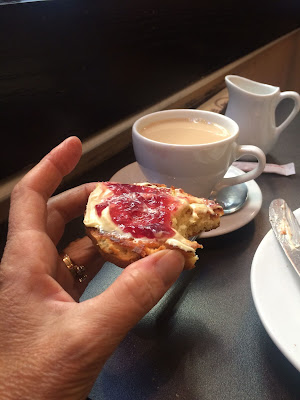 Posted by SconeLady at 9:23 AM