Grandma was asleep, and missed the whole thing.

The plan was to meet at the park - the quintessential, kid-centered park that everybody loves to go to and nobody wants to leave. The one place in town that has hills, and valleys, and soft grass, a soft playground, a water fountain, and a View. All of this rolled into one delightful spot.

There Grandpa went, on his motorcycle.

"Grandpa! You CAME!" they shouted, running. Sometimes they would get rides on the motorcycle, and eyed Grandpa closely. But today wasn't about rides, it was about riding - and so out came the bikes and the scooters, along with the gliders (at least, there were two gliders - the other one having suffered an uncertain fate). The stage was set, and all they had to do was step onto it.

Mother and Grandpa chatted amiably, ever watchful of the three who were buzzing swiftly about like young gnats. And 'swiftly' isn't even HALF the word! They were practically rocketing, in every direction but up. It was just so entertaining to have Grandpa there. Grandpa always made things fun, and helped with the logistics - like gliders, and swings, and water fountains. 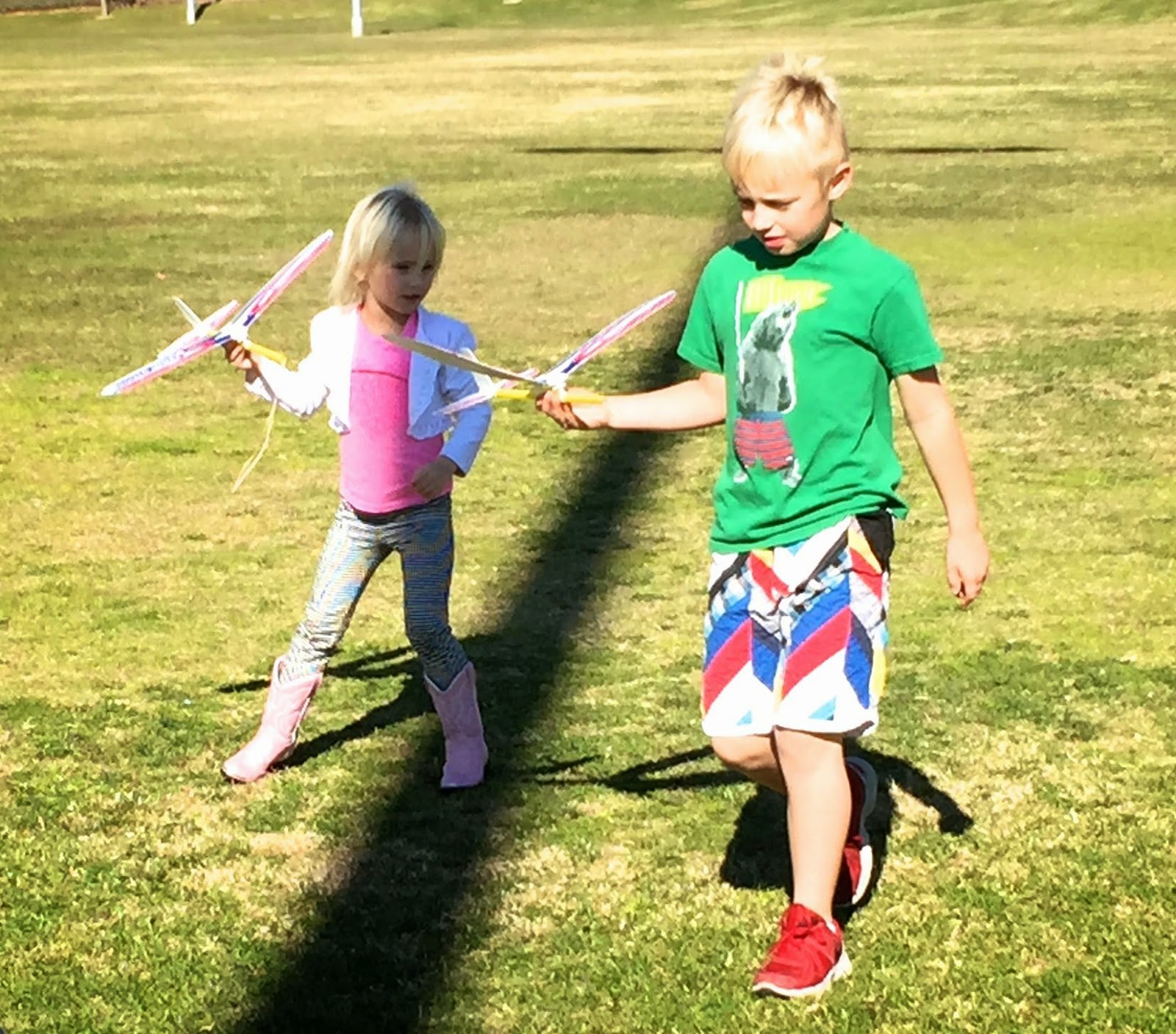 The 7 year old just loved the glider he had gotten for Christmas. It flew through the air like nobody's business. Over and over again, he threw it into the wind, Grandpa shouting encouragements and helping with retrieval. Until - oh! what was that? The glider flew up, up, and out - over the road, into the nearby development, and - it was gliding so beautifully - ONTO A ROOFTOP! Oh no!

In dismay he eyed his craft, wondering what could possibly be done to get it back. But it was far away, and sunset, and time to go.

Everyone made their way back to the van, bringing bikes, and scooters, and helmets, and - one lonely glider.

"Goodbye!" the three piped. "See you later!" And off they drove, as the sun went down.

But Grandpa wasn't ready to leave, not just yet. He got on his motorcycle and began slowly to circle the nearby streets, searching for the roof that had that glider. He wasn't just certain, but - maybe this next house was it.

He approached, and rang the doorbell. A nice lady opened it. He explained. She smiled, saying, "Yes! There is a glider on my roof!" She ushered him in through to the back, and Grandpa made the retrieval. There is going to be one very happy 7 year old boy, tonight.

These are some of life's simple pleasures. It's really nothing to do with huge financial dealings; or with international strategizing; or with wars and rumors of wars. It's just the simple recognition:

A grandpa is an awfully handy sort of person to have around.

See you along the way!
the SconeLady
Posted by SconeLady at 7:24 PM