Everywhere tonight throughout this great land, there are plans afoot; plans that will include scones, and friends, and tea. There may even be costumes. The SconeLady herself has been invited to, and will attend, one of these gatherings. She can hardly wait and is going to bake up some of her best scones from The Digey Food Rooms of Cornwall. And what is all this excitement? Why all the buzz? Don't you know? It is because tomorrow night is...

Yes! It has been such ages since the season finale that we have hardly known what to do with ourselves. It is the same every year. The season finale happens, leaving everyone in a funk, and bereft. A swift depression descends (at least for a few weeks) and then we gradually forget - until Masterpiece emails start coming in to remind us that Downton Abbey still exists. And then the whole rigamarole starts all over again. 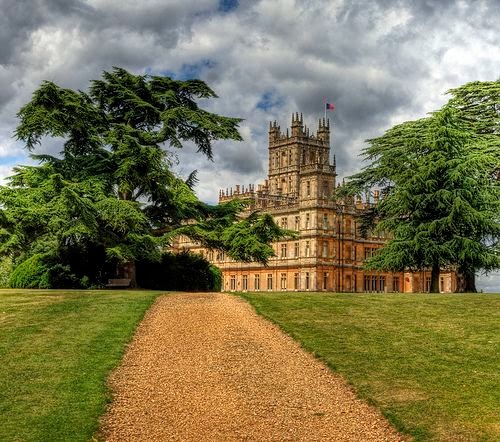 And who, really, can blame us? We have been drawn in, and we do not wish to be drawn out (even if I have been known to accidentally fall asleep from time to time..). Walking once again with the Crawley's every Sunday night is exactly where we want to be. Do NOT feel sorry for us, I beg.

In all of this preparation I could not avoid thinking back with nostalgia to Matthew Crawley, who so horribly left us at the end of Season 3. I have vaguely wondered as to whether the series has quite recovered? Whether Mary's search for a new Beau has been at all successful? I can't begin to remember them all, but surely none of them will be able to take Matthew's place! Oh sigh.

But let us put away such sad and gloomy thoughts, shall we? Let us look ahead to a new season, certain to be filled with all sorts of new surprises and mysteries that will both shock and awe. And while I won't be dressing 'in character' tomorrow night, I will certainly be ready to laugh at the Dowager Countess, be scandalized by Thomas Barrow, cheer on Mr. Bates, and adore Mr. Carter.

(I only hope I don't fall asleep).