Life as a Scone Lady, part 2

We moved to England, on purpose. The military had first say, of course, but both of us had hoped for it, and my husband had requested it. So we began to prepare, and to look forward to wandering the paths of the England we had come to love, through books, and history, and reputation.

The arrival was in autumn, and cold weather was there waiting for us. Our first outing two days later was a quick drive to the China Tea Pot, in Godmanchester. Craig had learned of its existence from someone in the squadron, and we approached the place with great anticipation. There, we had our first English scone, with butter, jam, and whipped cream, with tea served to us in a beautifully made china teapot. Just down the street there were ducks for our daughter to feed, and other delights yet to be discovered.

We were to make many trips to the China Tea Pot during the next four years there. We also frequently visited Auntie's Tea Shop in Cambridge, which is famous for its own scones. An upcoming post will lead you to want to experience them for yourself!

Sadly the China Tea Pot is no longer in existence. But Auntie's is still there, baking itself multitudinous scones to serve to the SconeLady anytime she wants one. 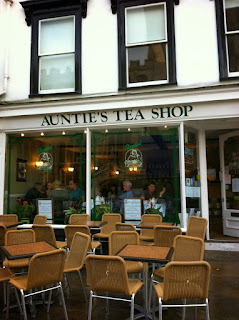 Posted by SconeLady at 7:38 AM