How Grandpa Saved The Day

I was standing at the sink when I discovered that there was nothing left to do. We had run through the abundance of activities that usually take place at Grandma and Grandpa's place. You know, all the hot tub events, jumping into freezing pool water, lighting a fire in the real wood fire pit and roasting hot dogs, riding in the boat to feed ducks and gulls, going on motorcycle rides and learning to 'steer'. All of this, finished. It was a poser.

There was one hour left to fill and I looked over at Grandpa, hoping there might be an inspiration that direction. And wonder of wonders, he came up with one just when we most needed it!

There just so happened to be 3 airplanes nestling in the closet, like some kind of miraculous backup plan. I couldn't believe it when I heard him say, "I think there might be some airplanes.."

Some airplanes! The oldest boy perked up his ears, for he could tell something was afloat. Grandpa had that look in his eyes that he gets whenever there is a secret about to be revealed. He saw Grandpa going for the closet, and whooped when the packaged planes came into view. All three children trooped over to the kitchen table and began the assembly process. 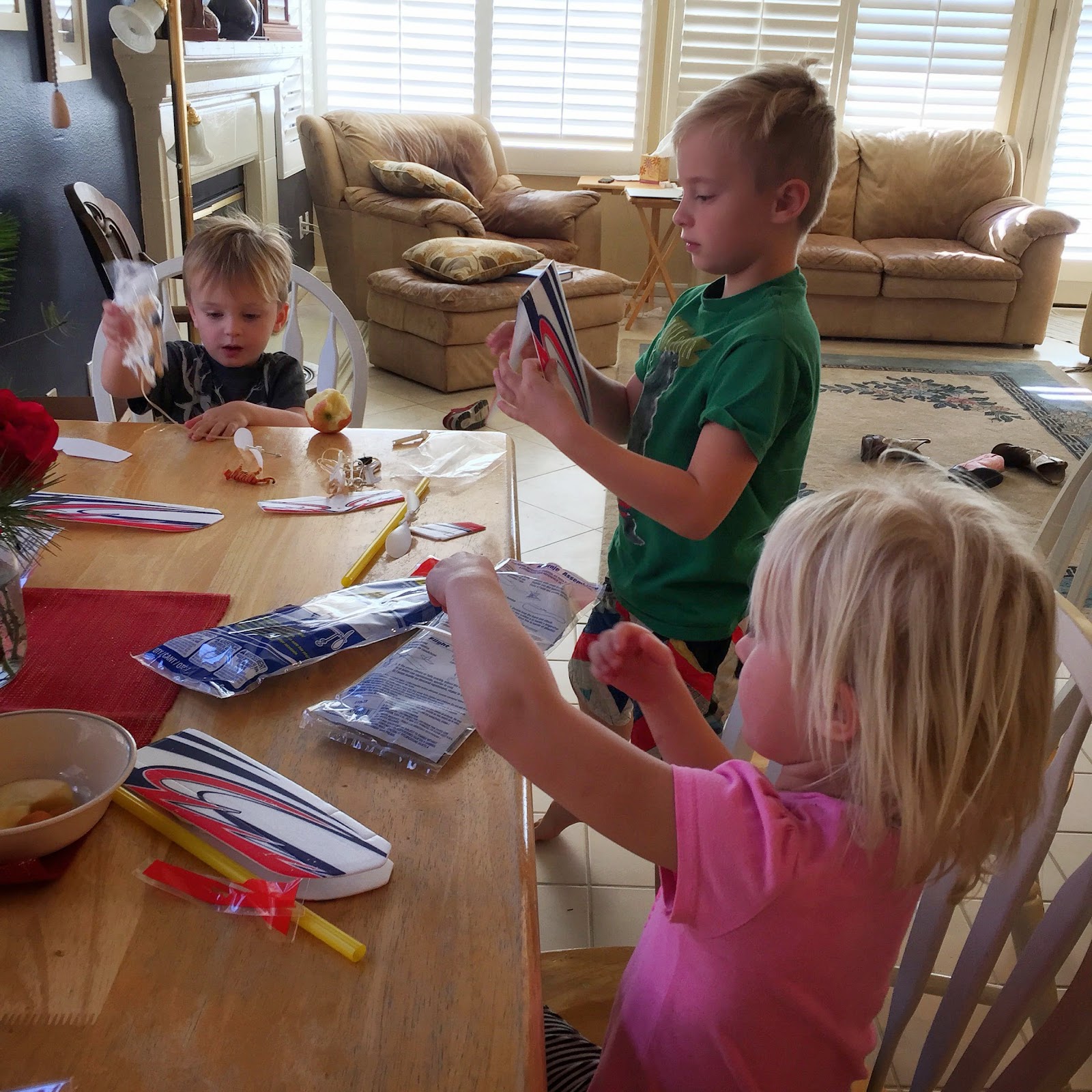 As you might expect, this process was somewhat complicated. There were a lot of moving parts, and everybody needed help at the same time. The 7 year old was right in his element, because he adores building and putting things together. The small girl was not far behind, and waited nicely as she held her bits and pieces, waiting for Grandpa to come to her.

The 3 year was eager, and confident, and needed the most help - of course! But Grandpa was kind and patient and enjoying this as much as they were. Out of the three you see before you will likely come an aviator one of these days. It's inevitable, I think.

At last, all of the planes were ready and assembled. It became important that they were flown before anything had the chance to fall apart.

And so into the van everyone trooped, soon spilling out onto the green grass of a nearby park. Now in order to fly these things, you have to spin the propeller round and round for a really long time, then pose the thing, and then let go. Up and out it goes, to everybody's extreme satisfaction. There were a few complications, though. The rudders were coming off, and they soon learned that without a rudder there could be no real flight. A handy principle to know. So they learned to put them back on again, hardly skipping a beat.

And then, some of the props began coming undone (not surprising given the high number of flight attempts). In the end, everyone's prop came off, but they found in the end that the things flew better without them. Hah! 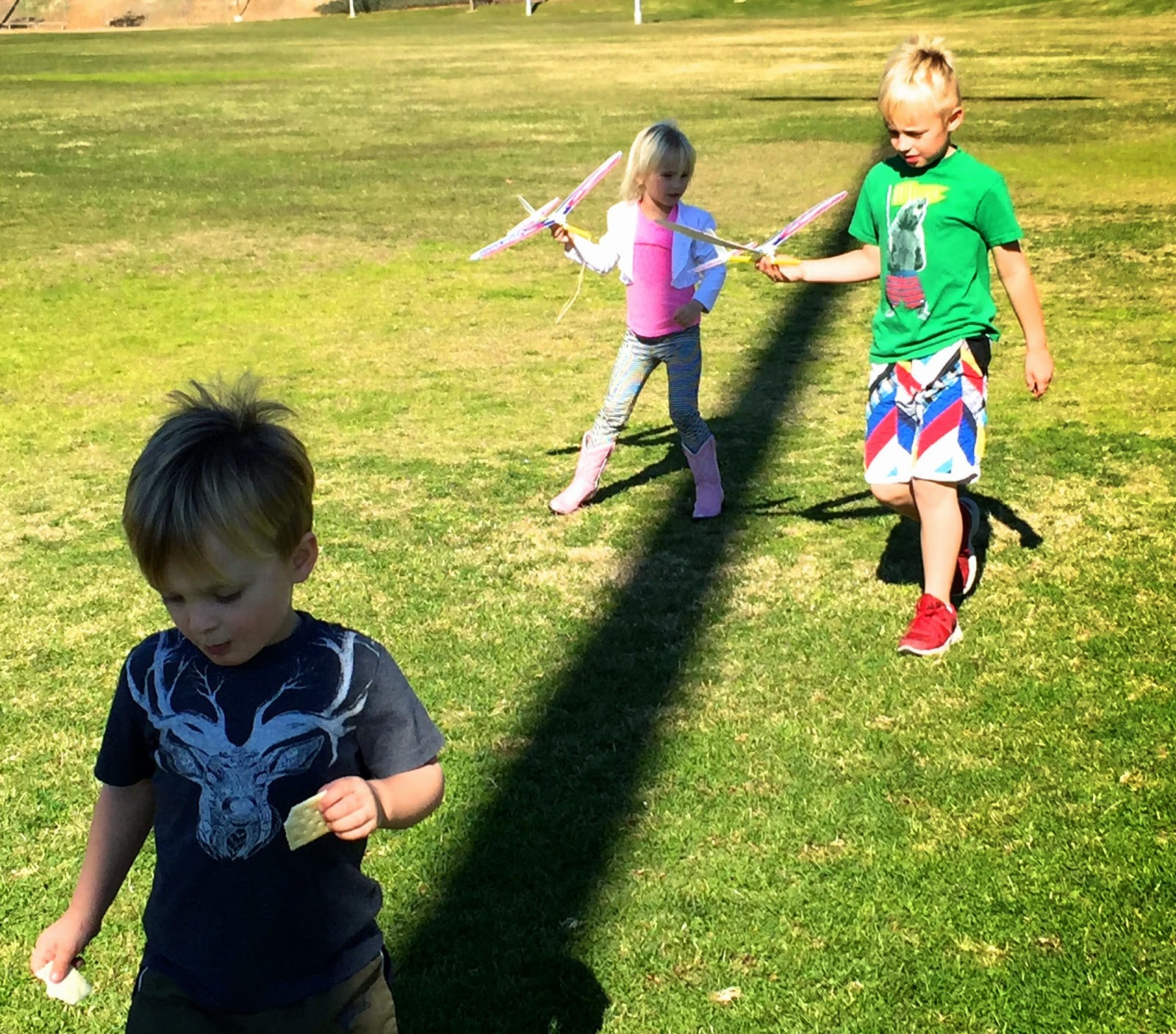 Soon it was time to gather up the bits and pieces, being sure everyone still had their props and their rudders. Into the van it went, and we all headed toward their home and Mommy.

Because no matter how much fun everything was, and however many activities were explored, there is still no place like home, and no person like Mommy. Ecstatic hugs and shouts of welcome emanated from that little blue house, and everyone was happy.

Thus ends the story of how Grandpa saved the Day. 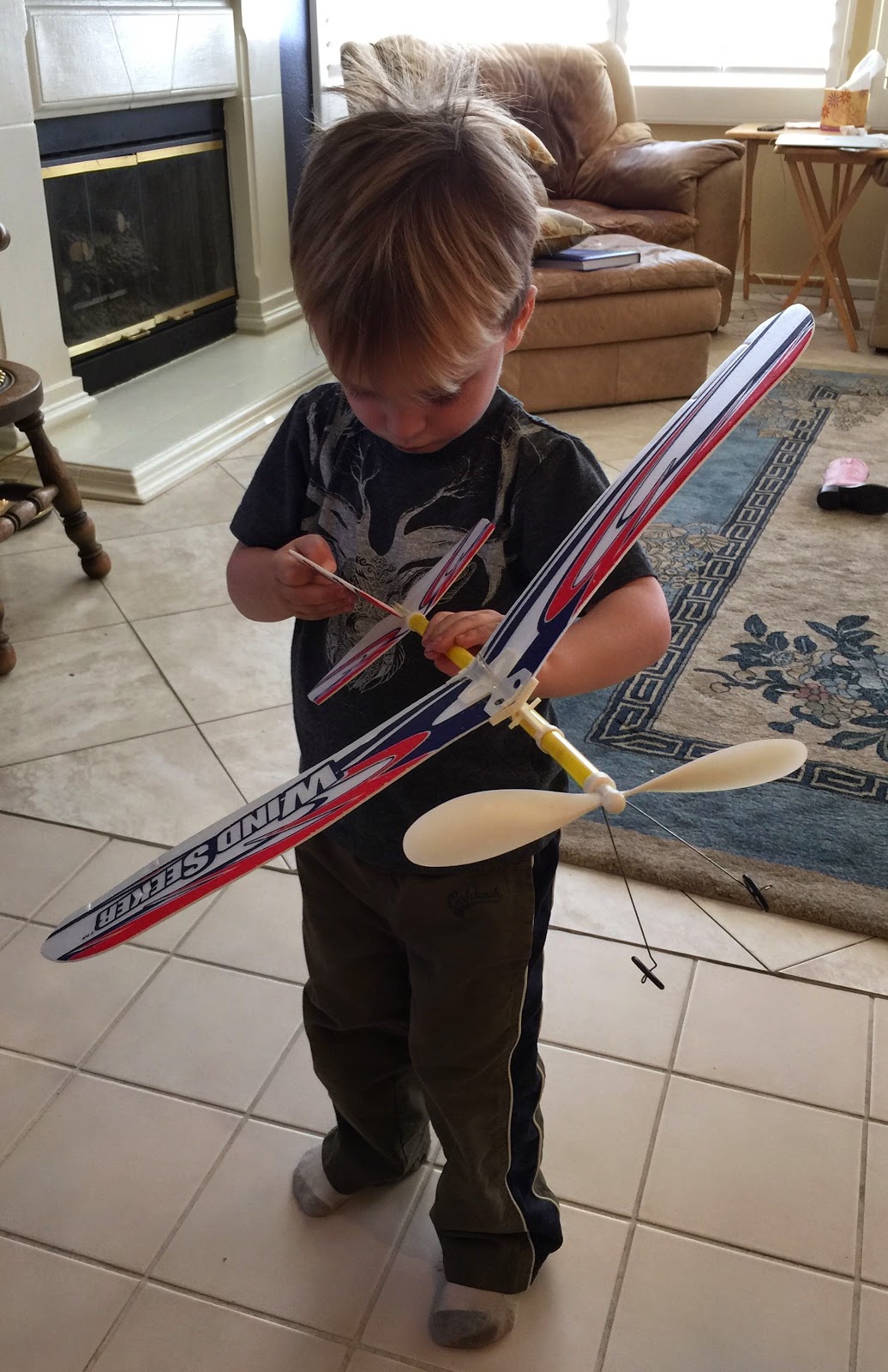 Posted by SconeLady at 7:15 PM