It was high on our list of ’17 things to do while in Cornwall’, a list we have studied and mapped and followed. And #3 was Truro Cathedral. We would never forget about going, and had in fact wanted to go on an earlier day. But it had started to rain. And then there was the walking tour. And the golf game. Oh, and we had the walk to St Michael’s Mount, so who was ever going to have time to add on a Cathedral? 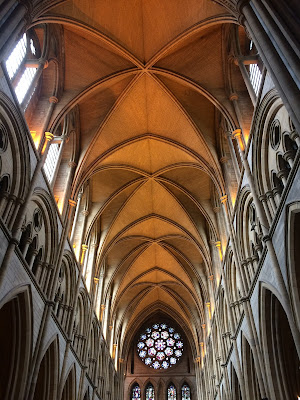 For Truro Cathedral by all accounts is an 11 out of 10. Absolutely no one should miss it, most especially the Brotherly Traveler. So after our breakfast, off we finally walked through the streets and down toward the railway station.

Just taking the train is a Cornish experience. I have decided that one of the reasons the young people here are independent so early in life is the presence of railway cars. Railway cars are packed with young people. And not just teenagers – younger people than teenagers get on trains every day, which helps them to become independent of their parents and to lay their own plans. Don’t you think?

Anyway, as they were cramming themselves aboard our train and laying their own independent plans, we laid some of our own. We had decided to make our own lunch and to eat it at some convenient point during our day, perhaps sitting atop a park bench, or something. We would also arrive in time to attend the free cathedral tour and then perhaps have some tea and cake. All of these plans sounded yummy, and we were eager.

Once you arrive at the Truro railway station, you must walk 0.8 miles down to the Cathedral, and this we did. Upon establishing ourselves as tour participants, we sat with our guide and listened to a marvelous lady welcoming us all from a microphone somewhere high up in the Cathedral, and then leading us all in The Lord’s Prayer. Once this had finished, our guide (the redoubtable Mary) began the tour. I can tell you just by looking at the photos I took, exactly what we saw there: 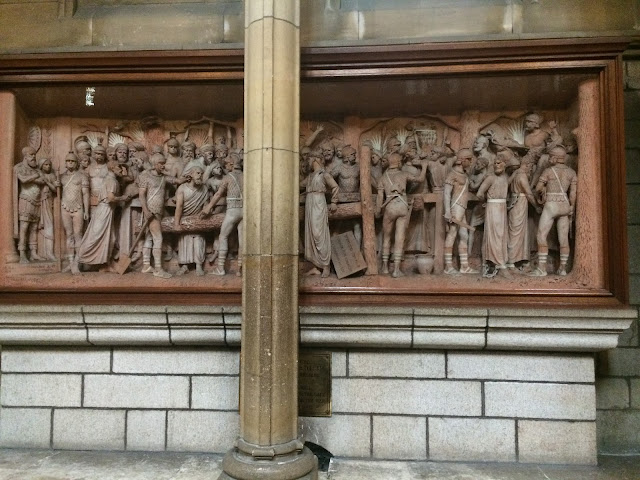 There were so many other things I could share with you, but haven’t the opportunity. Yet if you keep in mind that there is but one central Person honored within this magnificent granite structure, you can begin to understand at least a small inkling of its significance.

And, our final plan was realized! Charlotte’s Tea House appeared before us as we approached the Cathedral. Instantly we knew this was the place for our after-Cathedral bite. And, as you can only imagine, it was a worthy bite.