Cornwall, Day 18 (When Cornishmen are Laughing)


You can't really see the whole thing from here, but the SconeLady was trying to be sensitive with her photography. For nearly two hours we sat at the back of the Choir as they rehearsed, and felt awed. From their first sweet notes, we were in it. 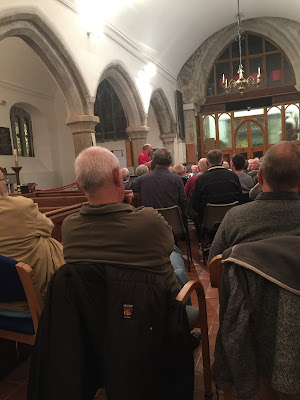 There were 80 of them, and with those acoustics their voices lifted that whole bunch of us higher than any Alps ever could - and we didn't have to spend a thing. It was all just as free as the air.

Three of them (just in front of us) had been 'out of commission' for a while, due to various surgeries. But they came anyway, just to listen and watch their music. That is how dedicated these Cornish choirmen are, dear Readers. Wild horses can't keep them away. I can understand why, too. Upon the first notes they sang, both the Brotherly Traveler and myself instantly choked up. Teared up. Cried! However you want to put it, that's what we did. And it wasn't the last such moving moment. There were scores of them.

After a while, we started trying to understand what the choir director was saying - and failed. He is as Cornish as you can possibly get, and it was no use. Great clusters of words flew past us with nary an inkling of their meaning. But the men understood. Sometimes they nodded at his words, or scoffed good-naturedly, but more often they laughed. Loudly. Which showed that their director had a great sense of humor, only we just never got the joke. We laughed anyway, because when you are in a room full of laughing Cornishmen, you must laugh too. It can't be helped.

After the rehearsal had finished and all the chairs had been put away, we filed out the door and back to the car. Down from the high places we sped, along the narrow streets and roads that run through Mousehole, Penzance, and thence back to St Ives. As we drove along we laughed at the funny rivalry between our two Cornish escorts, who kept up a steady competitive banter. Why should they compete, you might ask. Is it sports? Is it politics? Neither of those, dear Readers. Their competitiveness centers upon one thing, and one thing only. Where they live: one lives in Penzance, the other in St Ives. We did not take sides in this rivalry, my friends. Oh no, we would never take sides, hurting one and favoring the other. They are both too sweet for us to ever want to do such a thing.

However, if push actually came to shove and we were made to choose, I don't think there can be any doubt as to which town the SconeLady would favor. But we'll let that be our little secret, shall we? I want to be on the good side of the Mousehole Male Voice Choir, for a good long time to come. 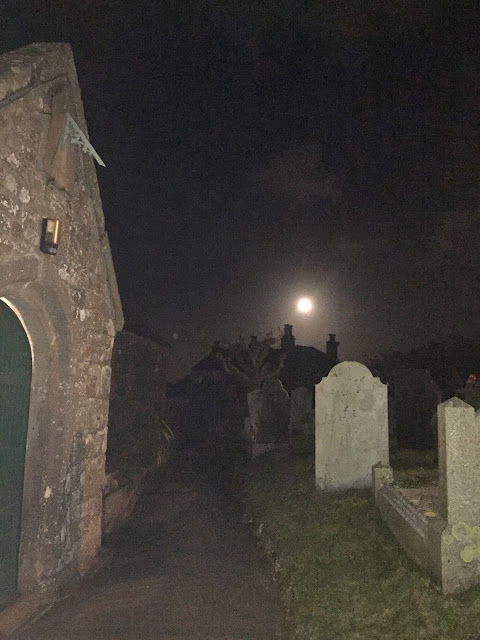 Coming out of the Paul Church and into the moonlight