We were wandering from room to room within the castle when suddenly, we were inside the Chapel and gazing up at this: 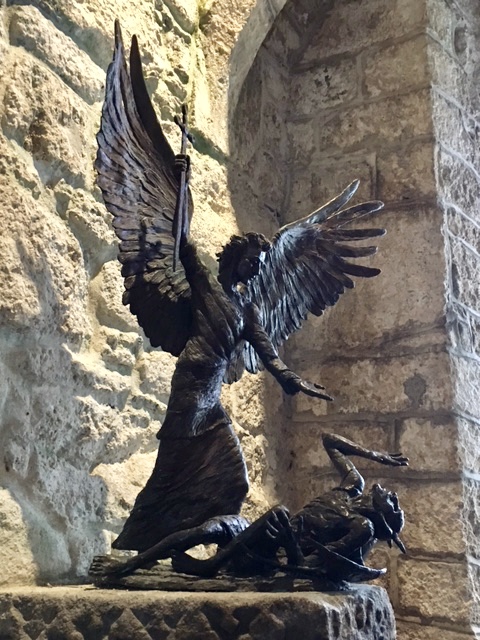 I have made it extra large here for you so that you can gaze at it too. The original sequence of events which led us to this moment were:

It was then that we entered the Chapel and came upon the terrible and wonderful sculpture of St Michael and Lucifer. Almost, it would spoil it if I talked much about it here. Almost, you don't need me to. You can see already its import and its gravity without my telling you. Someone mentioned Michael's 'upturned palm', and marveled. Someone else saw it and exclaimed over its beauty and its encouragement. It was further discussed, and the thought was expressed that St Michael appears to be indicating 'Come', while Lucifer appears to be responding, 'Go' (ponder their palms). But whatever I say here will fall short, so I will just let you gaze, and marvel.

Walking the 3.3 miles from Penzance and back with the Brotherly Traveler was both joyful and informative. We literally talk, dear Readers, every day from morning till noon, and from noon till night. Then we get up in the morning and start the whole thing all over again. Isn't that just about the best thing in the world? Life is short, and I am discovering an increasing number of people whom I would like in my corner when times get tough. The BT is one of those.

(And St Michael? Oh, he's definitely one of them too.)

This beautiful bronze statue of of St Michael defeating Lucifer was commissioned by the fourth Lord St Levan and was sculpted by Lyn Constable Maxwell in 1989.