It was far too lovely a day to stay in, don't you think? This was Cornwall at its best yesterday, all blues, and whites, and greens. And tans! The sand is tan, a creamy smooth tan unlike any other. A person could sit on their bench overlooking the view forever, and never want to leave it.

Today the brightness continued as I climbed aboard the 13:00 bus to Penzance. There is a tea shop I quite prefer there, one where they let you sit upstairs in a comfy lounge for as long as you like. And with wifi.

As my bus drove along, I could tell right away that it was a friendly one. Behind me were the voices of two ladies chattering away 19-to-the-dozen at top volume. The interesting thing was, they were not only talking high speed, they were talking AT THE SAME TIME. Their voices did not wait for an opening, they just went and did not seem to stop. But they kept up quite a meaningful conversation all the same.

They were so good-natured that when there was a pause, I turned around and said, "It's fun the way you two understand each other - you even finish each other's sentences!"

"We've been doing that for years!" said the other.

"Ah...that explains a lot. I have sisters like that," I said. "We finish each other's sentences too. Only not quite so effectively as you."

Their stop approached, and they picked up the rope of conversation as they descended the steps. I watched as their heads bobbed along beside the bus for a few seconds. They saw me then, and waved (still talking of course). I felt quite included in their sisterhood and was sorry when it was ended. That's the trouble with a Cornish bus. You never see the people again.

As I made my way along to the little tea shop, I suddenly wished for a sister to talk nineteen-to-the-dozen with, finishing their sentences and laughing hysterically. But then - oh comforting thought! - I remembered that my brotherly traveler would be in Cornwall tomorrow!

I've never actually finished one of his sentences, but maybe it's time I tried. 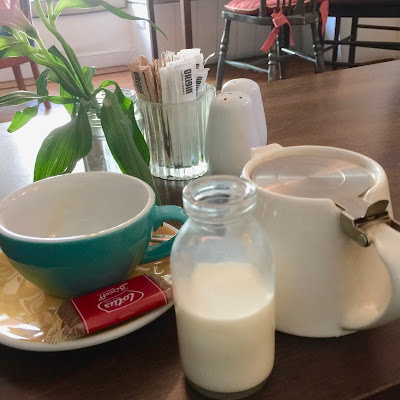 Pot of tea at The Front Room, Penzance 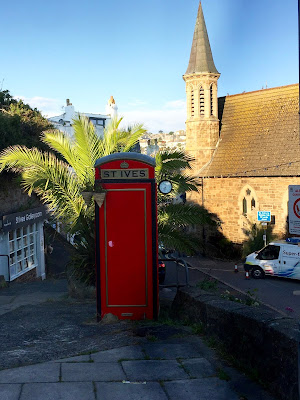