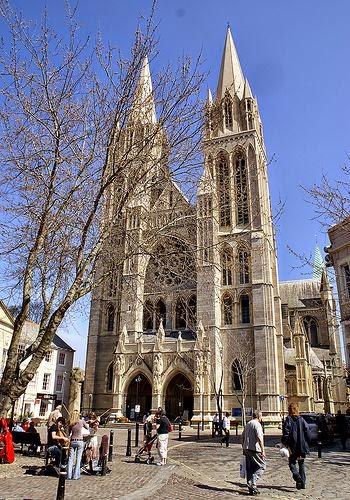 The SconeLady is having difficulty just thinking up enough adjectives to describe what she saw today. None of them suffice.

But I shall give it a try, all the same!

Yesterday we were blown back to our fisherman's cottage while attempting to get to Truro Cathedral. Rain and wind had done their best and defeated our efforts, but we made it today - and I am so thankful that we did. After our train ride and our walk to the city center, then coming around the bend and finally seeing it, I felt speechless. You can see its beauty here, but it is truly something you must experience in person to believe.

Our first view of the inside revealed this loveliness: 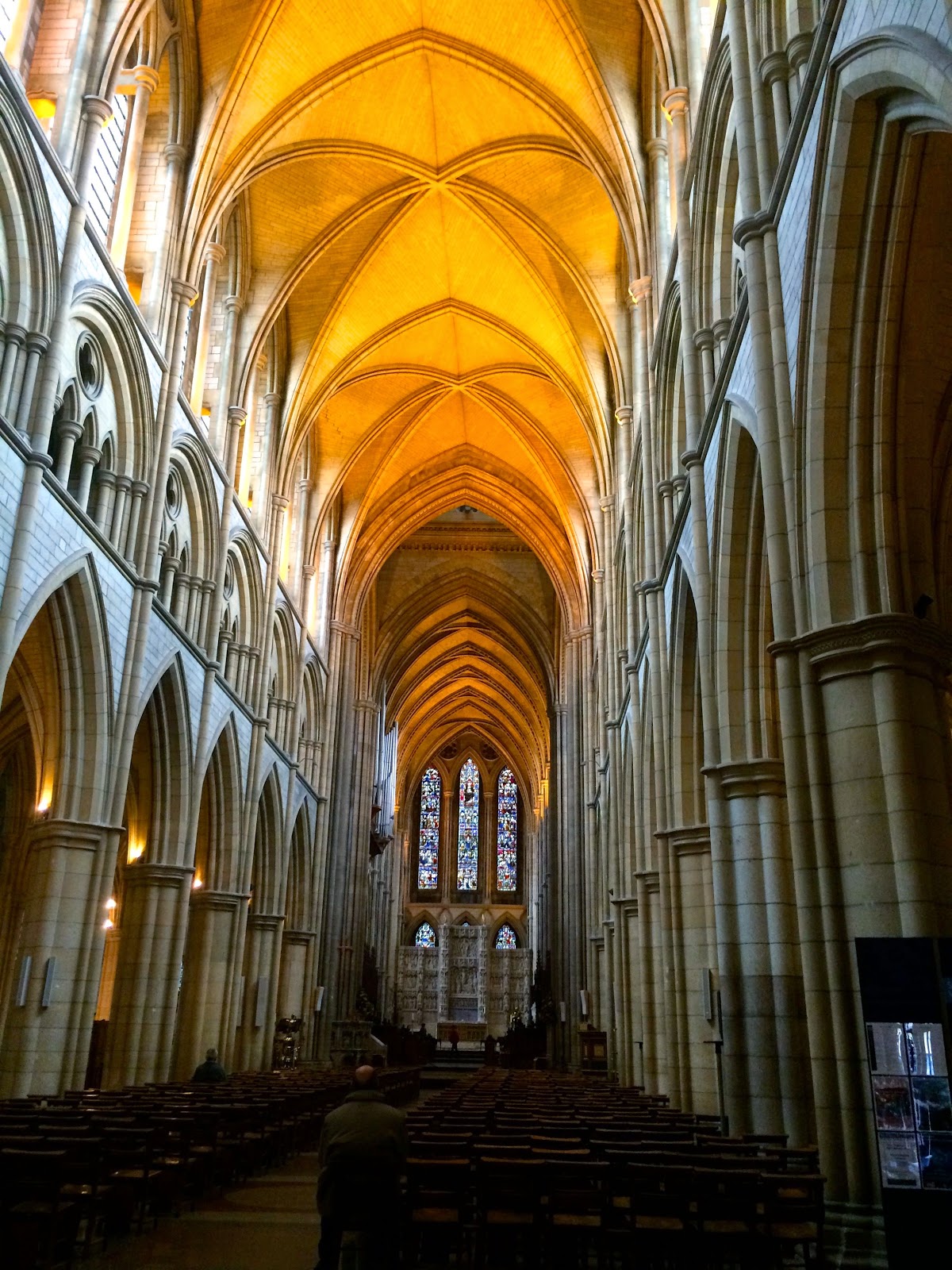 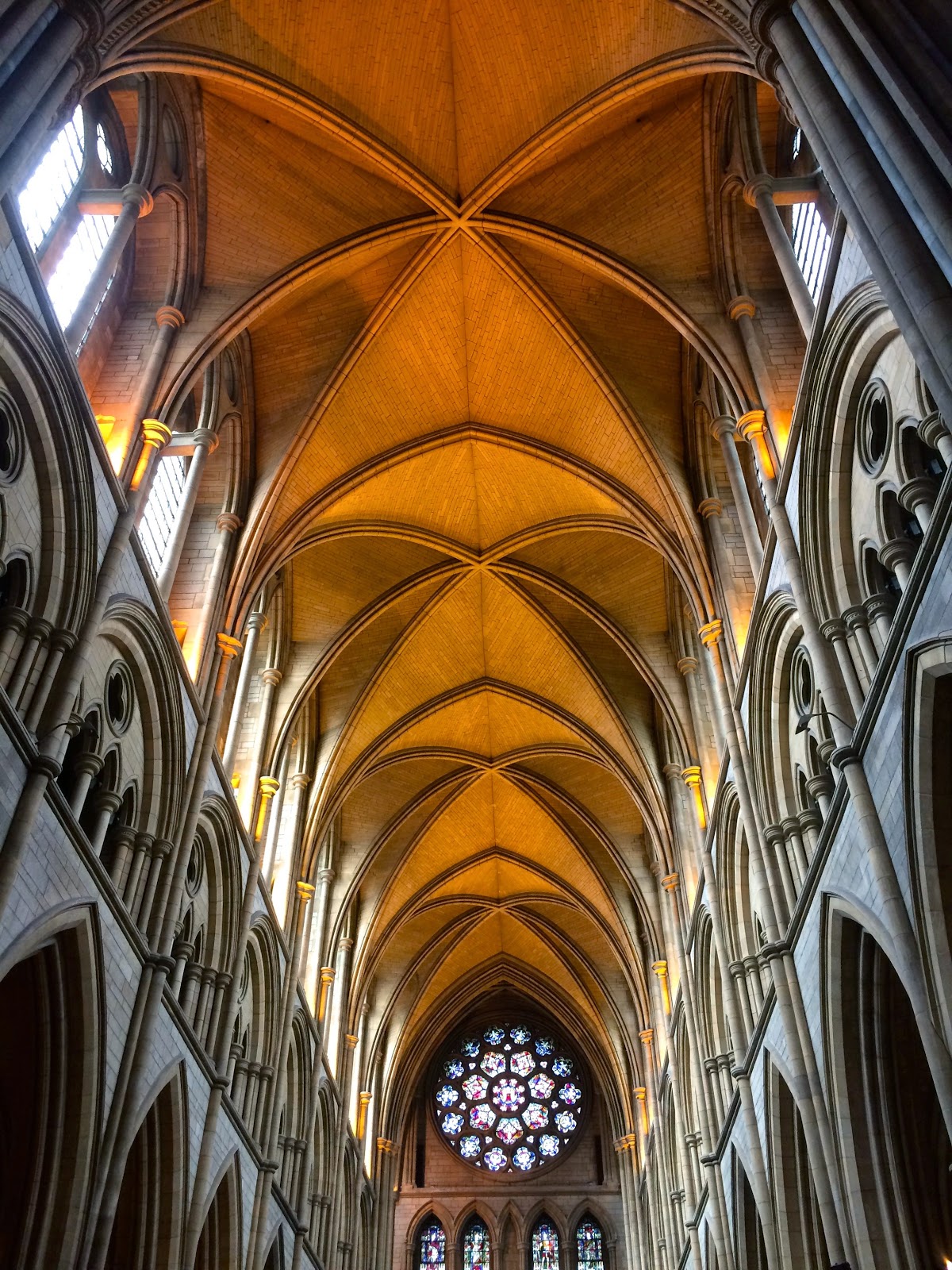 You see? No adjectives.

We arrived in time to take part in the free Cathedral tour on offer, led by this very kind and knowledgeable tour guide: 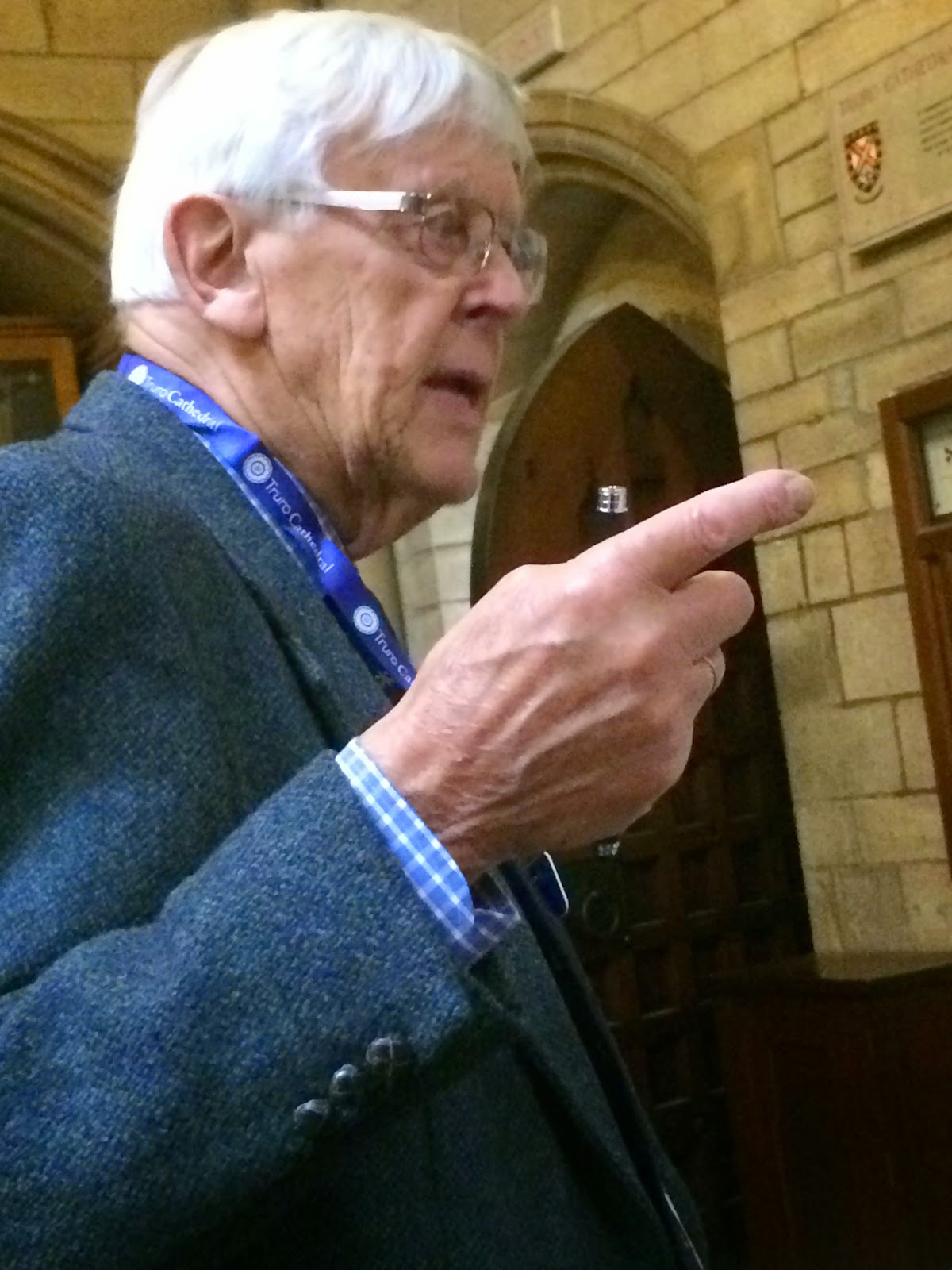 He described to us the significance and design of the stained glass windows; the beauty of the preserved south aisle of the old St Mary's parish church (incorporated in the design); the magnificent organ, which was intermittently being played as the organist practiced; the marble figures behind the altar, and much much more.

But best of all was the terra cotta frieze by George Tinworth. I have spent time trying to find a really good photo of it for you, but the best I could find is the one I took myself - not that good. In fact, no photo could really replicate this wonderful piece:

'The Way of the Cross'

I couldn't believe there was a pillar in front of it! It was created in 1880 and given to the Cathedral some time later. But it was placed behind a pillar, right where Christ is standing. These figures display the events of His journey toward the Cross. Beginning on the left with Pilate and his wife; to Simon, who was called upon to help carry the Cross (the centurion pulling his ear); to the man who tried to get a higher elevation to see; to the centurions and pharisees; to Christ here in the middle, comforting his mother Mary, and Mary Magdalen; a fight going on along the way; and the two malefactors who would be crucified with Him.

The frieze became my central focus within this fabulous Cathedral. It, and everything we saw today shows what inspiration existed in the hearts of those who created it all. And we learned that there are something like 42 Cathedrals in the United Kingdom. How great would it be to go on a Cathedrals Tour, one day! Doesn't that sound grand? Let's see, there are a few I have seen already, over the years:

We didn't get to ride on any more trains or buses with our day passes, but we did find the dearest tea shop: 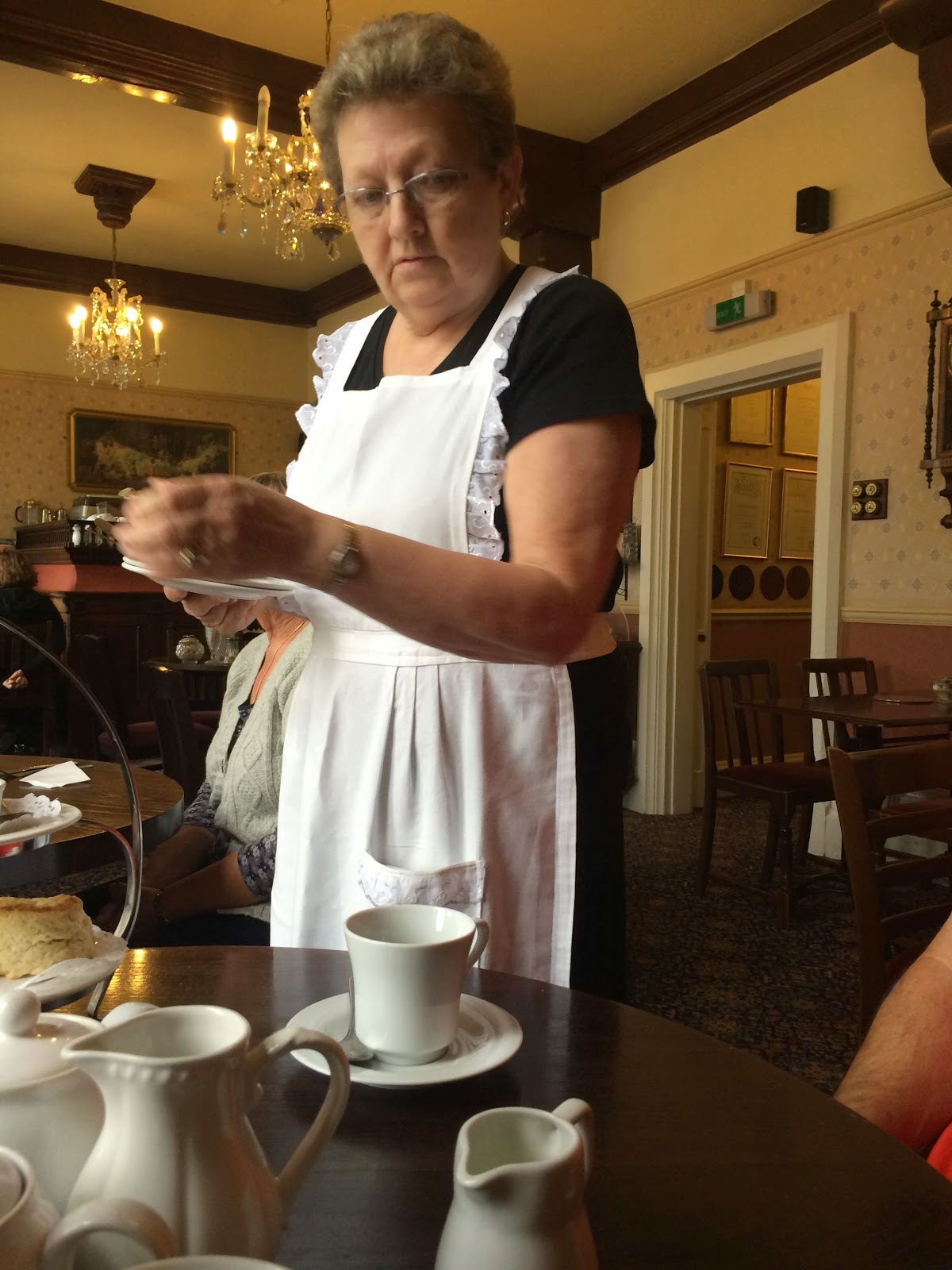 Charlotte's Tea Shop was everything any cream tea lover would love: white tablecloths, white porcelain tea sets, waitresses with Georgian clothing, and antiques. Not to mention the scones! The Georgian waitress called especial attention to the protocol - that one must (absolutely must) spread the jam first, and then the cream. She would be watching, just to make sure.

Thus ended our day in Truro. The Cathedral, the tour, the terra cotta frieze, and Charlotte's Tea Shop were all terrific. Impeccable. Exquisite! 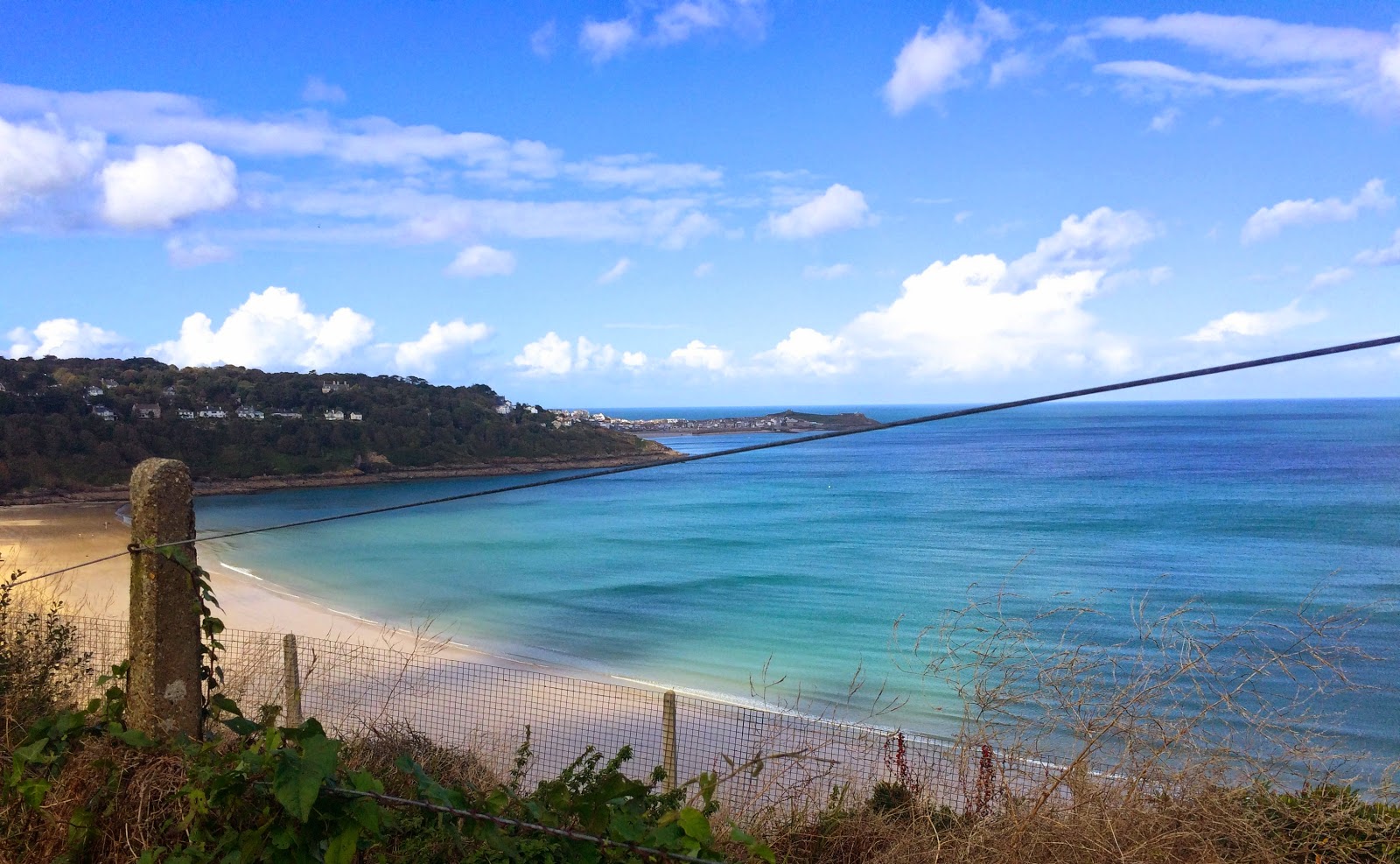 Posted by SconeLady at 2:38 PM