I awoke to the familiar sound of roller bags on cobblestone. Someone was probably departing St Ives, and I felt sorry for them. For after all of that storminess and raining sideways and huddling over hot coffee, it all went. It was a glistening morning, and the sad travelers with their roller bags would be missing it.

But I would not. There was too much to do! 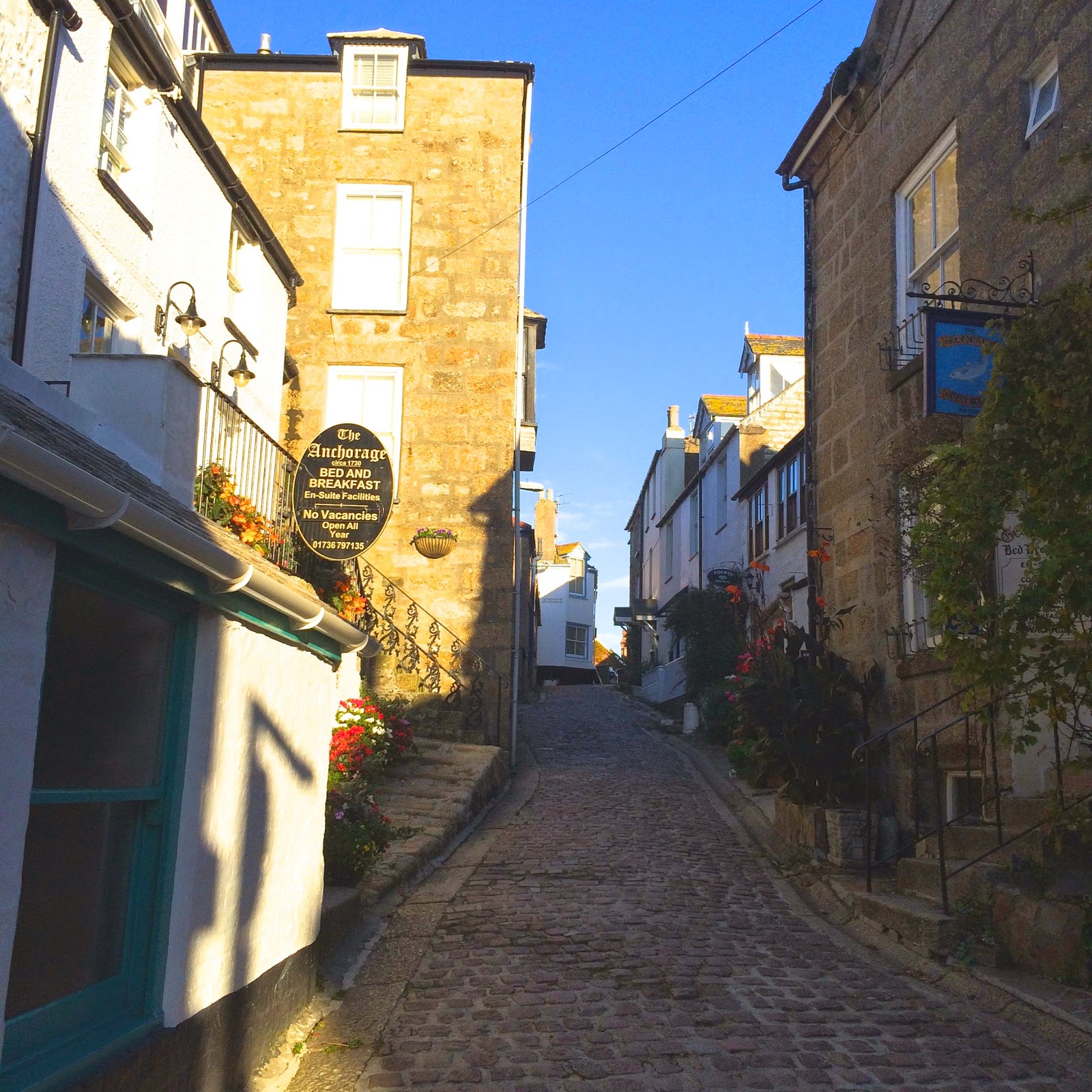 I had to run along to the Wharf, and visit my favorite spot in the sand. You know, the place where three people sat with their scones and their tea behind the picket fence. I have visited it every day since. 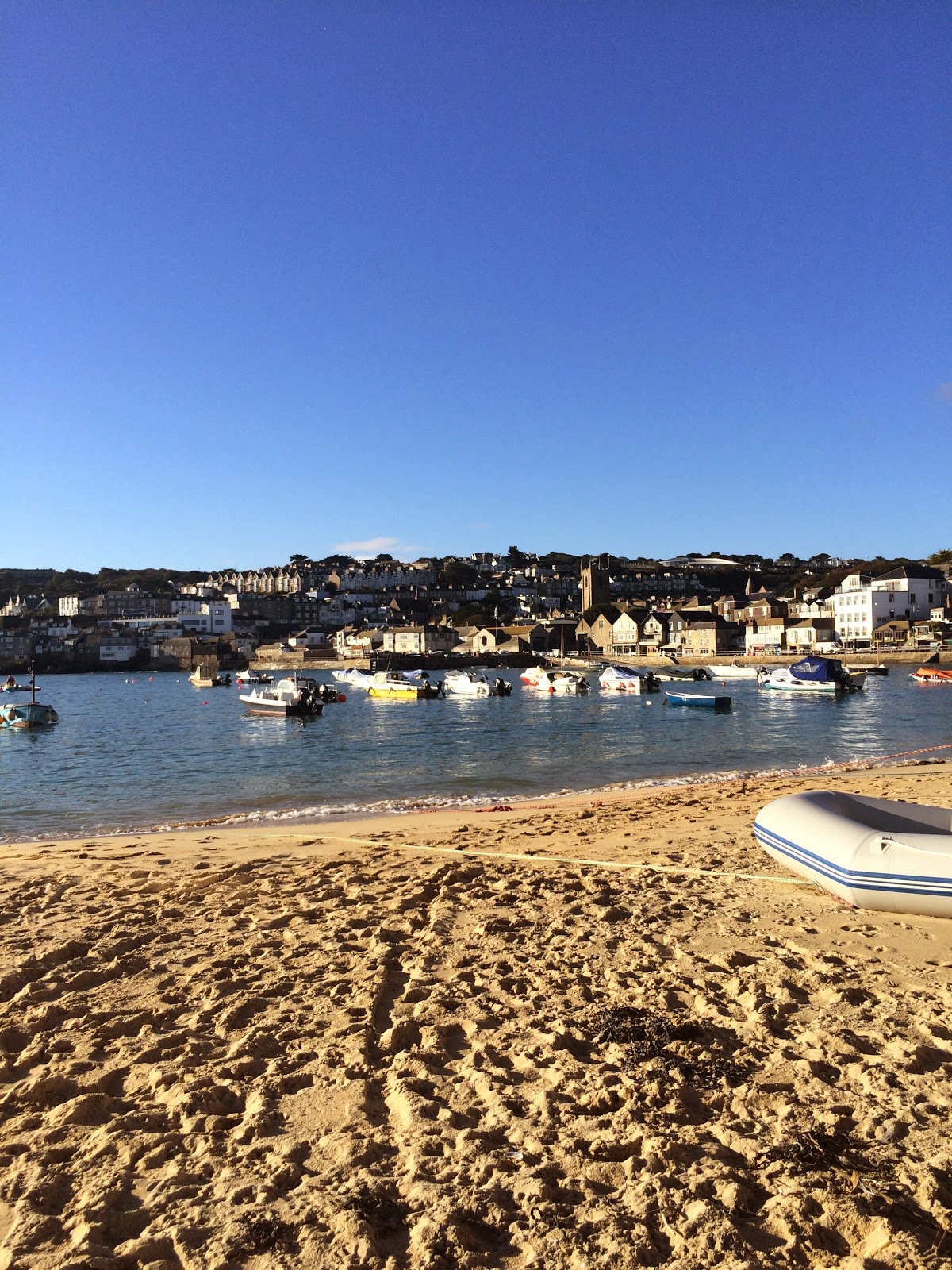 After buying two croissants and some fresh Cornwall butter, we two sat across from one another with our own fresh coffee, the croissants, the butter and the jam, and were content.

The many lovely art galleries in St Ives were my next project. One must have something to bring home for one's walls, and the lovely daughter and I had an active text exchange about which ones might work. She has a sense about these things and is willing to help, even if she is 8 hours behind St Ives and I might wake her up.

In my search, I met an artist. He was not there when I first visited his gallery, but I was told he would 'be in when he wants to be in'. So I came back later, and found him quietly seated behind his counter. It was a red letter day, I am telling you, because he was kind and interesting. And although he is an amazing artist, he comes to his shop and meets people.

I shared how much I liked his paintings (the originals of which would be far out of my reach), and was glad there were prints. I pointed out the one I would like, and he offered to 'tube' it so I could more easily take it on the plane. While he did this, he allowed me to take his photo: 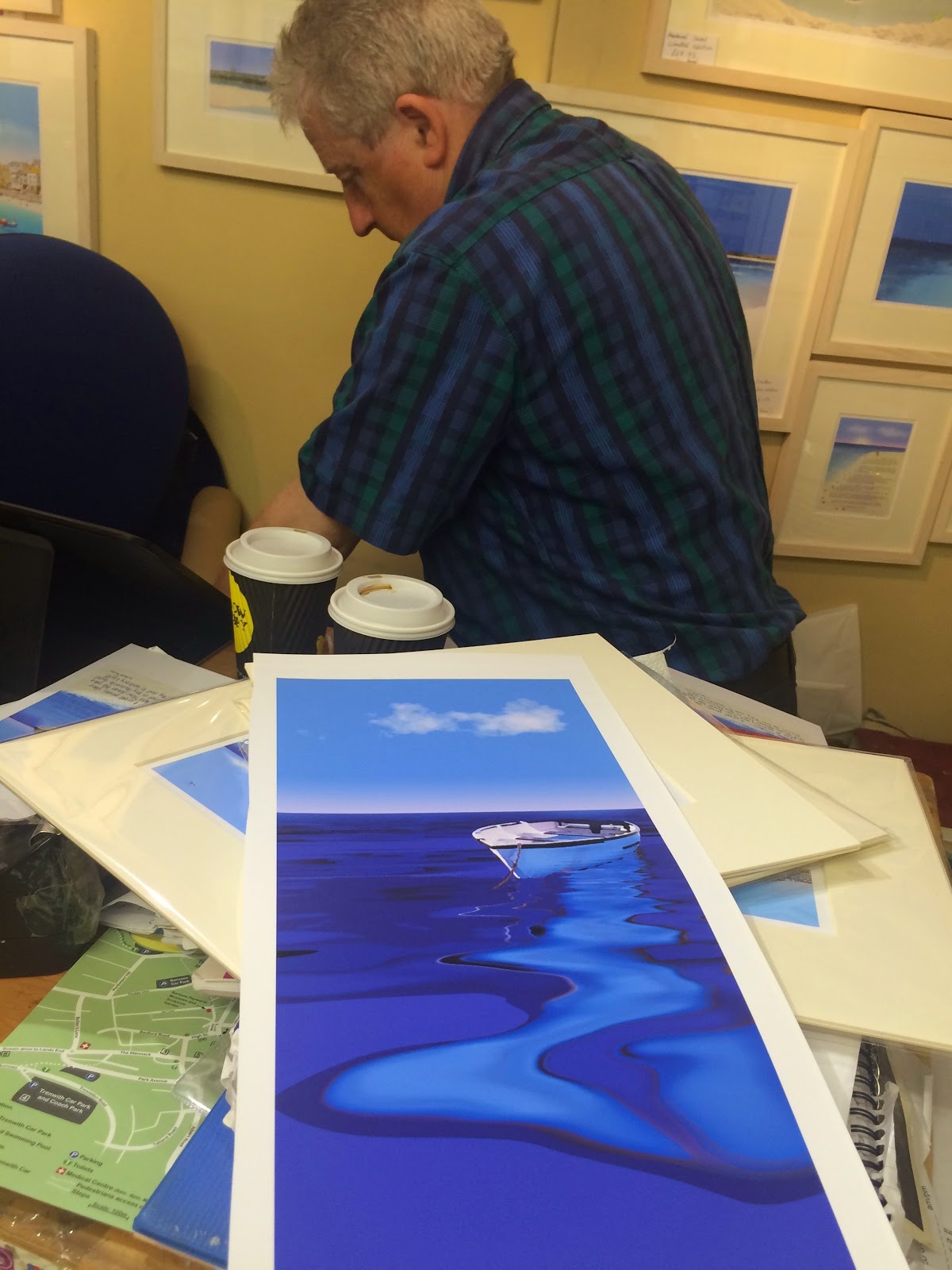 That's the way of St Ives. You can meet real artists who care about their art and their town. And the two are always linked.

But I wasn't finished with meeting the town's interesting residents! We went on a walking tour of St Ives, led by Tony Farrell, learning the history of St Ives, of it artists, and of its fishermen. Then we made our long and climbing way up to the cemetery: 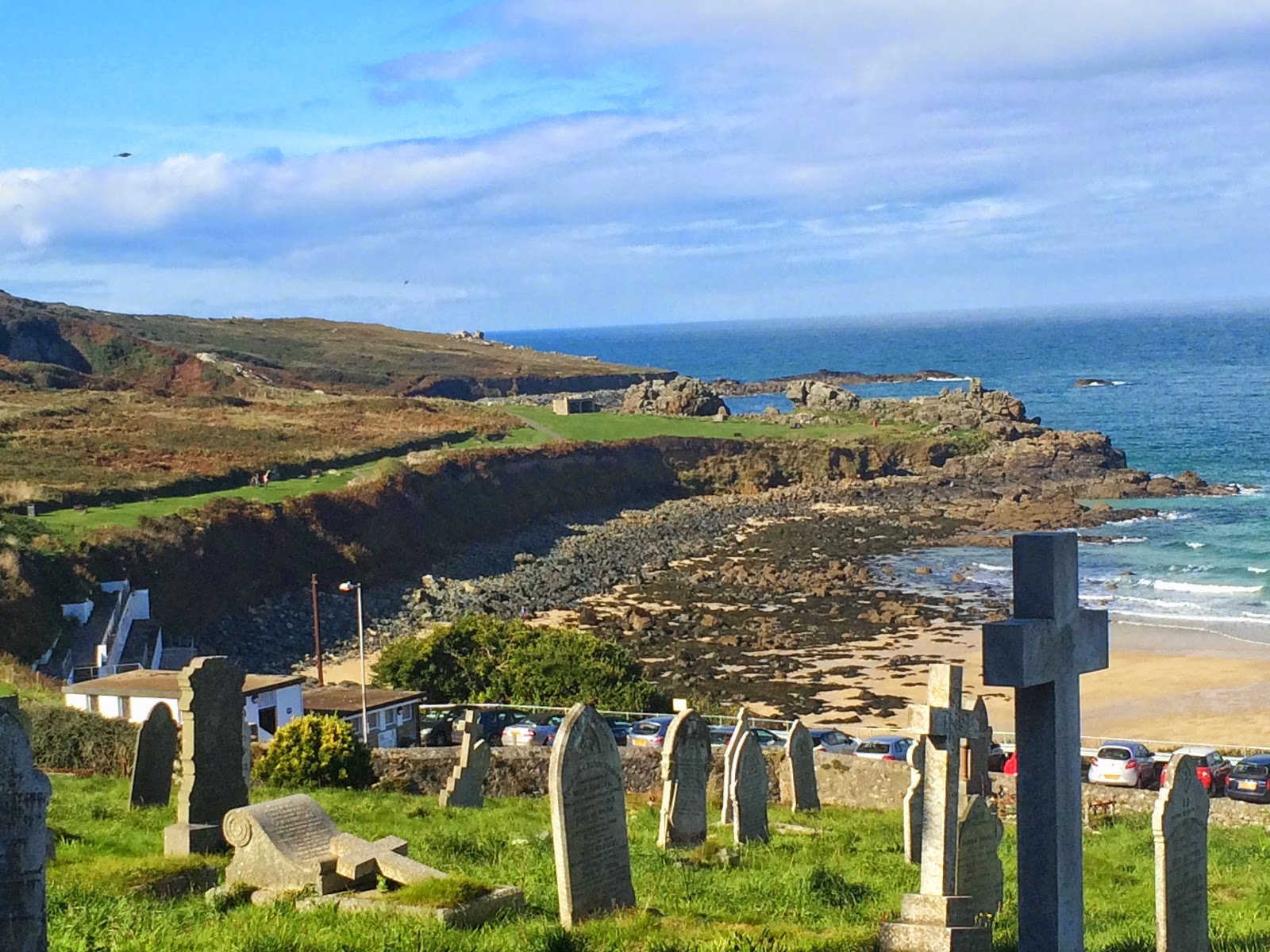 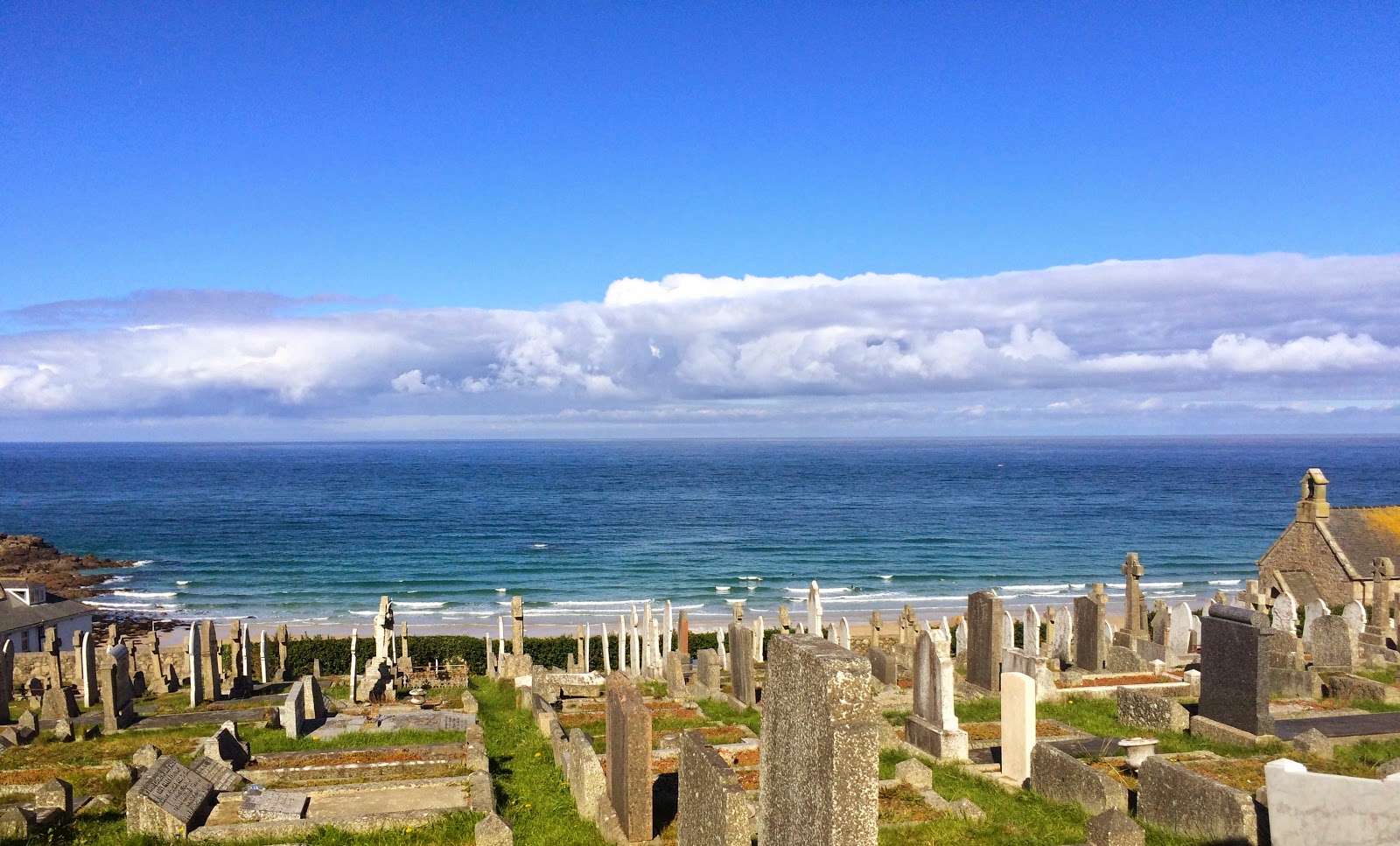 He concluded by leading us to the grave of Alfred Wallis, an artist who had first picked up a paintbrush at age 67 after his wife's death. Now well known and revered, he had died a poor man but left behind his collection of remarkable pieces. It was magnificent, standing out in this cemetery overlooking the brilliant sea, and listening to Tony describing these events as if they had just happened yesterday.

One can never come to an end of learning about St Ives. It has layers. 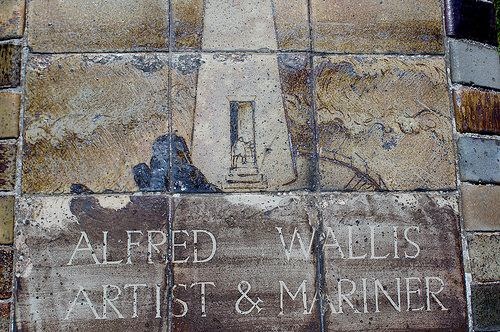 This lovely day just went on and on, during which time I:

And I am feeling the Countdown beginning now. The family awaits and I can't wait to see them. But I mean to squeeze all I can out of these last few days. In the end, I'm afraid that I might leave a little piece of my heart here, in this sweet, this mysterious, and spectacular place called St Ives.