When You Want To Go 'Downtowne' 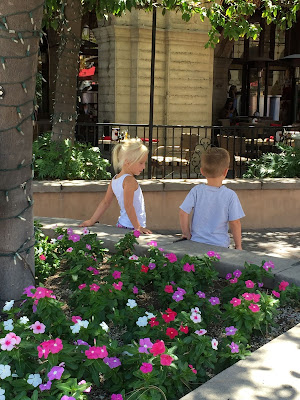 Where else can you find perfection and happiness but in the company of cupcakes and books? Today, those two items were found to soothe if not the savage beast, then at least three children who were hungry for both. It was a day of perfection anyway, with a blessed cool blue sky hovering and not oppressing (ah, divine relief from the nailing heat of SoCal!).

Grandma pulled up outside The Little Blue House and could soon hear many activities going on inside of it. From somewhere a dog barked. Children tumbled out of the front door to welcome the new arrival, grasping her hands and telling her all of their bits of news at once ("Athena is tied up outside. She is NOT ALLOWED in." "Grandma, can you help me find my Little Miss books?" "Grandma! We are using a van now that has doors that open and shut BY THEMSELVES!" - this, with wide blue eyes). 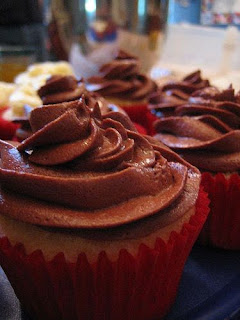 After all of this it was time to strap ourselves in, let the doors close by themselves, and head for downtown. Everybody loves downtown! We were all hungry and ready to find a spot that would satisfy the appetites growling around in the back seat. First stop, the Bistro. Gigantic ham&cheese croissants; grilled cheese; sliced chilled oranges and grapes. It was all very satisfactory.

Next up had to be the fabulous cupcake shop wherein each person received half a large cupcake (the rest saved for daddy). Our little Goldilocks daintily ate her treat, pronouncing it neither too big, nor too small, but "juust right!" The perfect after-lunch snack, to fill up any lingering empty spaces there might have been after all that croissant. 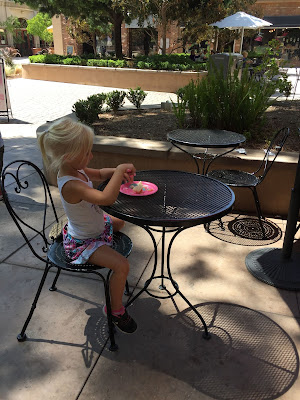 Then last and best was the hour spent in the dearest place filled with used books, 'Downtowne'. This shop contained shelf after shelf of books, high and low, and also a children's corner brimming with books and toys and games. It was a smash hit. 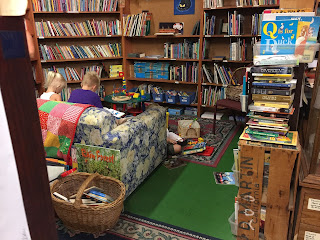 Their mother came away with a veritable Library of source books for their upcoming school year. She showed them book after book, asking their opinions and sharing bits out of several to whet their appetites. Tom Sawyer, Treasure Island, Frog and Toad, Huckleberry Finn- the Classics! Another complete smash hit.

And then reluctantly we all trooped back out to the van, and made our way home. Several hours, all told, none of which were stressful. Consider: three children age 3 to 8, in a restaurant, in a cupcake shop, in a used bookstore, and NOT ONE SAD NOTE WAS SOUNDED.

So next time you decide you want to go downtown, don't hesitate, don't put it off - get out there and make it happen. It matters not whether your downtown is miles away from ours. Every downtown has its treasures, if only you take the time to find them.