And speaking of cottages, I found such a darling one just across the water from this gem: 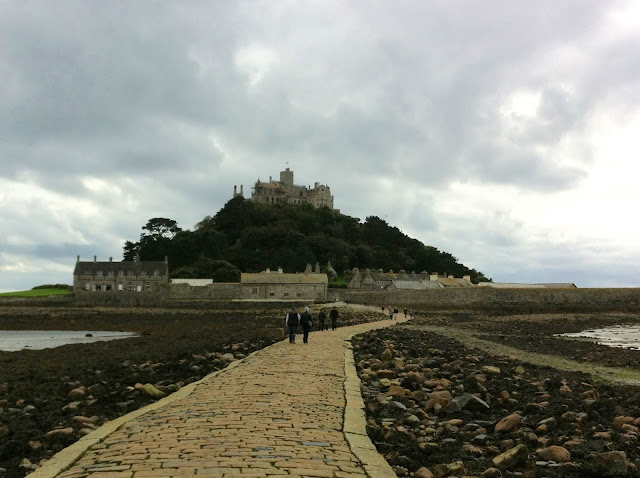 It is a new and surprising turn of events, venturing somewhere other than St Ives. It is only for a week, though. And it looked so charming that I just could not resist it (I'll take photos for you when I get there). For one thing, it is close to the water and you can see St Michael's Mount just outside your window. For another, the colors inside the cottage are smashing, and I feel it is perfect for writing the sweet story that deserves to be told. Ambience. You must have ambience for these things!

Something else that I will like about staying in this particular spot is the lovely walking one can do here. One can walk to and from Marazion right along the beach! In all winds and weathers! One can walk from Penzance to Newlyn to Mousehole, never needing to hike up steep hills or cliffs. There are cute little tea shops and Tobacconists and galleries galore! And just look - it isn't very far up to St Ives (see below). All one need do is walk a few yards to the Penzance railway station, jump aboard the Great Western (perhaps after enjoying a pot of tea in the station), and you're there! It just couldn't be any more satisfying. 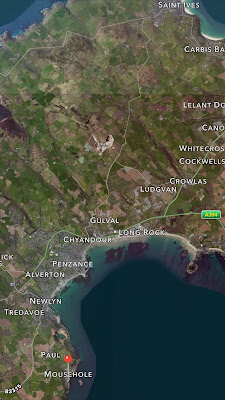 Mousehole, Newlyn, Penzance, and (not listed on the map) Marazion.
(St Michael's Mount is the little peninsula-looking spit of land, to the right.)

I just remembered, now, that the Tobacconist is no longer open. Upon my last journey I stopped in to see him. He and his wife were looking somewhat forlorn and I gently said, "I heard that you may be closing..?" They both said, at nearly the same time, "Yes. It isn't a great time for Tobacconists just now. We had to post so many dire health warnings that after a while, we just lost steam. We retire next month."

The poor things! They had such lovely pipes. (Do pipes do so much damage? I just don't know..).

Once while walking from Penzance to Newlyn I came upon a Gallery that was free because my sister had given me a pass to it. When I arrived, no one was inside but a sweet Docent, sitting near the door. She was relieved to see another human being and jumped at the chance to tell me about the Art and where it had come from. There wasn't very much of it (hence the lack of visitors), but it was kind of her all the same. I remember feeling that if I were to work in such a place, I should go stark staring mad.

So it is with great anticipation that I approach this particular week of my journey. There is so much 'scope for the imagination'! Just think of riding on trains, and getting off whenever you wish, and all of the jolly walking to and from interesting and quaint villages along an English sea wall. 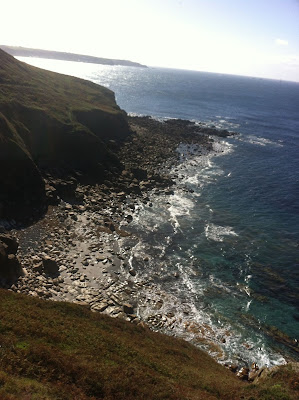 See you along the way!
the SconeLady
Posted by SconeLady at 4:47 PM