Imagine my delight upon finding a Rosamunde Pilcher book I had not yet read! To a lady-Anglophile, there is almost nothing finer. And within its pages are chapters centered upon such places as Islington (featured in other of her books); and Paddington (gateway to Cornwall); and then of course, Cornwall itself! It was an immense surprise, and so rather than rushing through it, I am reading it in a state of ease - gradually, so as not to finalize it too quickly. It is already intensely sweet. 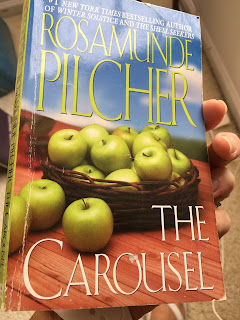 To make this discovery on the eve of a flight in that direction has me utterly overjoyed. It is a sort of coming home, not only because I will be actually there, but as a homely 'read', as well. I had thought years ago that there were no further Rosamunde books to be had; that every last one of them were dog-eared and had been consumed multiple times, by me. And then yesterday as I idly perused our bookshelves, straightening and dusting, my eyes lit upon a title I did not recognize. The Carousel.

What was it doing, sitting there? I hadn't heard of it, let alone read it. It must have been meant! I thought. Upon the cover were lovely green apples (featured in the book, I am discovering) on an outdoor table, and the green grasses, blue skies, and white wispy clouds of Cornwall. Oh, blessed discovery!

It is only 233 pages and so won't take up very much of my time. I am on page 54, in fact. But each page already shows the promise of every Pilcher novel along with the ability to draw one in, as only she can so consistently do.

I do so love a Pilcher.

If you are one of my dear German readers, you will know and love Rosamunde already. This is because German film makers have made numerous films from numerous of her books, and the public simply cannot get enough of them. When I researched free photos of Rosamunde, only one popped up. And it wasn't of her. It was of a film set, in Germany, that was meant to depict St Ives, Cornwall: 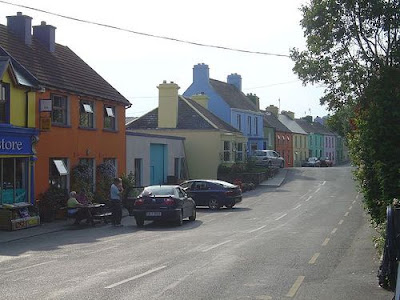 
It does nicely depict St Ives, except that the colors are somewhat brighter than the actual cottages in St Ives. This photograph is probably even more ideal than the place itself, but then a film must have that quality of surrealism to carry it off. To make you want to go there yourself.

But I already want to go there myself, as you well know, with only weeks to wait. And then the walking, the scone-ing, and the writing can commence forthwith. So much to do, so little time. Somewhere in this house there is a passport; a rail card; some pounds and pence; warm clothing (perpetually stored away between trips); rain gear; a spare smart phone; a copy of 'Rick Steves' England'; and so, so much more. It'll be fun to get it all together. I will write to you as I prepare; maybe not every day, but as something pops up that I think you would like to know.