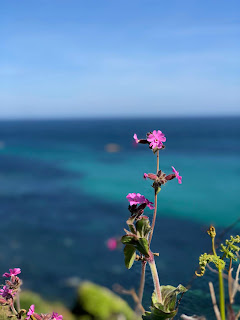 Have you ever known anyone who built a granite monument to themselves? Who spent thousands of dollars (or pounds) on the monument, even adding a mausoleum into which his body would go when it was his turn to die? We have always thought it a very odd thing for a man to do. But since he did it, and since the monument is there attracting our attention, we might as well go see it.

Whenever I walk the steep hills of Carbis Bay up to the tip-top ultra highest point, I am rewarded by the spectacular views from that Monument. John Knill never was buried inside it, foiling his well-laid plans. Can we ever know precisely where we will die, and when? He did not die here, but in London, and his mausoleum has remained empty.

Not to worry, though. A grand party is still held at Knill's Monument every 5 years, thoughtfully paid for in advance by John himself. He willed 25 pounds for each party, and a strict list of how the party was to be organized. I haven't had the privilege yet of being here on one of those days (called a quintennial commemoration), but I intend to. The next one is scheduled for 25 July, 2021. 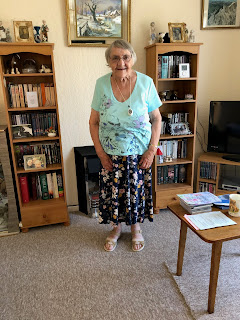 After seeing Knill, I always hike back down the hill again and visit sweet Jean. In her little cottage we chat over our tea, and perhaps a biscuit, laughing quite a bit. Jean is funny, and likes to laugh. The world is a funny place sometimes, and we like pointing out its foibles together. This time I brought her some bread - a half loaf of what is called "spelt" bread. Have you ever had some spelt bread? I can now say that I have! Spelt flour is a whole-grain non-wheat flour, and is easier to digest, apparently. It is a cereal grain in the wheat family. Now isn't that clever of me to know? Jean's face lit up when she saw it, and declared herself happy to have some for her daily sandwiches and toast. I like bringing her things to eat, because she always appreciates them. We said goodbye, and after the downhill stroll my phone began to buzz. The SconeLady's husband's face was on the screen!

As we chatted, this good man recognized something, and he is almost always right about such things. He identified that the SconeLady might be becoming lonely, half a world away. Hmm. 42 years teaches a man something. I thought about it, when he said it - or rather, asked about it. "Are you becoming lonely, my dear?" or words to that effect. And of course, instantly I knew, he was right. However much beauty might surround one, one cannot stretch the heart so far without consequence.

But help is coming! friend Rosie, Ted, and 'Em'; then the Rather Stunning Son and his Darling Girl, will all wander the green fields of Cornwall with me. Friends and family, on this side of the Pond! 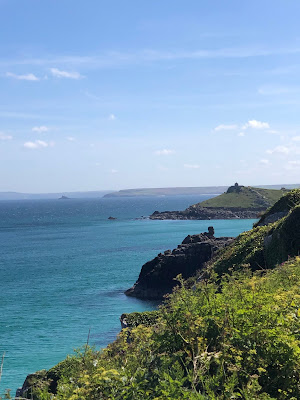