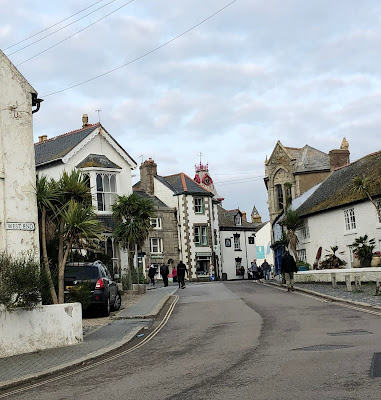 After the gift that had been Saturday, Sunday dawned all filled up with rain and storm. What to do? I wanted to be in Carbis Bay for the Methodist service at 10:45, and had just washed my hair, which meant that I needed to guard and protect it from the elements, meaning a much more complicated set of transportation links. Oh, the things we will do for hair (I know. Such thoughts are shallow, on a day of church).

But in the end, the church service was achieved (cab and bus) and dear people were seen. My dear Jean was there waiting for me, arms opened wide, and her friend Jean, and 'our Eric' (erstwhile driver of the SconeLady when needed), and Eric's visiting son, and one or two other friends, and then there were the other parishioners. A family! 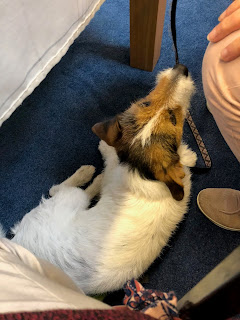 And did I say dogs? There were DOGS in church! Two brother doggies, who came with their mistress to keep her feet warm. She told us that last year, every time the congregation sang a high note, one of the dogs would throw back his head and HOWL. But nobody minded. It was just another doggie day in Cornwall. 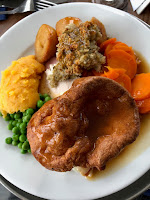 We sang the old songs dear to my heart, including Blessed Assurance and Just As I Am, with Eric at the pulpit preaching his heart out from the book of Revelation. After we'd had our coffee and rich tea biscuits, someone said, "How about the Carvery?" Well, I for one would never say 'no' to the Sunday Carvery, so off we went to enjoy that amazing British phenomena at a nearby and charming pub. As I sat down, Jean looked over at my plate and said, "I used to eat like that too, Dearie."  I laughed, and she continued, "Oh yes, I did, and it wasn't good for me, either. So I don't eat like that anymore, no."
I looked down at my plate and did feel that it was probably too much of a good thing (just look at that gargantuan Yorkshire Pudding. And you can't even see the three types of meat hidden beneath all that other food!).

Eric and Jean drove me safely back to Marazion, in the rain. They are lovely. Both in their 80s, both still youthful in spirit and in humor, and both eager to take an American sister under their wing, for as long as she is in Cornwall. And that will never be too much of a good thing. 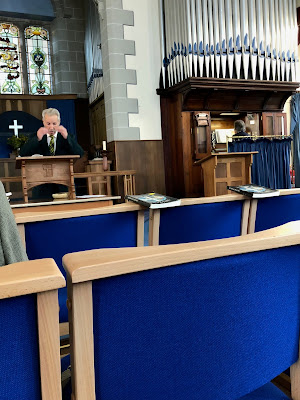 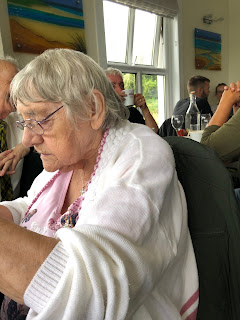