The Happiness of Freedom (2)


No tether! Wouldn't we all prefer this state of affairs? To be trusted and thus able to move about freely, as the Athena dog did on Memorial Day. It's much more fun that way!

My husband's family raised and trained many show trial dogs, over the years. These dogs were as trustworthy as they were beautiful. They needed to be in order to succeed in competitions. Something about their master's voice and hands reinforced all he had taught them, and by the time the trials came they won prizes of all sorts. They lived for those moments.

But such a thing must be learned - and earned! Even our own freedoms are ours as a result of obedience. You are not sitting behind bars right now because you obeyed the law. Am I right? Learned and earned.

But sometimes things can go haywire. One such true story went something like *this:

Once upon a time, there was a very nice doggie named Gypsy, whose master loved her very much. They lived near the lovely woods where they went walking companionably day by day. The master taught her to be good, and to obey.

At first he kept her tied to a leash because he did not want her to be lost or injured out in the strange forest. She learned her lessons well and finally earned the freedom to be let off of the leash. She was excited, and wagged her fluffy tail, and smiled her funny smile. It was a wonderful feeling of freedom, and Gypsy loved it.

Then one day Gypsy saw something out of the corner of her eye, just as her master was calling her back to him. It was a bunny! She simply had to investigate, and so she ran and ran to try and capture it. She ran until her master could no longer see her, and she could no longer hear him. He finally found her deep in the forest, tired and thirsty and sorry. She would NEVER run after a bunny like that again, she was certain.

But it did happen again and kept happening until her master found he could no longer trust her to be off leash. She lost her freedoms one by one and was a sad little doggie, there being no more bunnies for her to chase. Still, she carefully watched for her chance and one day escaped the house, and took off running. She ran so far that her master could no longer find her to bring her home. He was very sad, and mourned his sweet companion.

"Her free-will choice of chasing the bunny rather than obeying her master had led to other similar choices, until she no longer had a choice."


*adapted from the story of Gypsy, within A Severe Mercy.
-by Sheldon Van Auken (1978)

(Free-will is a lovely thing, dear Readers. But an awesome responsibility, all the same.) 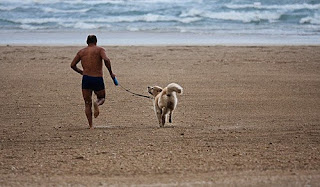 Posted by SconeLady at 7:11 PM