They had me with the Roar.

At the beginning of today, I had no idea at all that at the end of it I would be watching The Avengers. But I did watch it and it took me by surprise. Did you see it? Did you like seeing it? I did!

Granted, there were a lot of fight scenes. More, perhaps, than a chick flick might have, but we chicks sometimes need to embrace that and move forward. For part of the movie I closed my eyes and thought about the wonderful day I had just had. A day when I found something I thought I had lost (it wasn't actually a thing, it was a person). It was lovely. 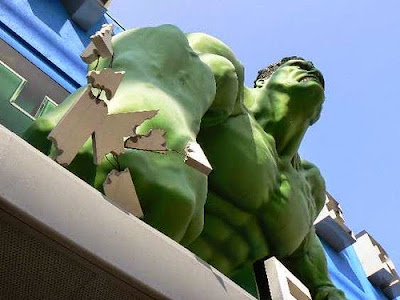 And then something loud would happen and I would open my eyes to another fight scene. It went like that for perhaps most of the movie.

But in the (I think) final fight scene, they had me. It was when the Hulk became green for one last horrendous bash, and went absolutely hog wild. Slamming into things and breaking them, hitting the bad guys who were made of metal and destroying them, and generally saving the day all around. It was splendid.

There at the end, the Hulk screamed his rather shocking scream and jumped sky high. I think he grabbed a flying ship of some sort. Oh my goodness. I felt he could actually be real, at that moment (how embarrassing). All that power. All that fury. All that - Mark Ruffalo... (Wow).

It's funny to think that the Incredible Hulk of years and decades ago is still so incredibly hulking. His story line is pretty much the same as when Bruce Banner appeared on our TV screens and tore up his clothing while becoming huge and green all at once. I liked it then, and I like it now. It is all very entertaining.

But really, I am awfully glad that we don't need a Bruce Banner to save our day. There is so much stress involved and in all honesty, I don't think my ears could take it.