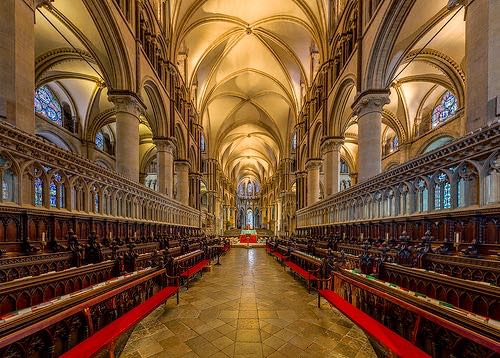 On my quest to see all of England's cathedrals I could not possibly leave out Canterbury, the seat of the Archbishop. The place where St Thomas Becket, Archbishop of Canterbury, was murdered. The place where so many pilgrims traveled in order to be near the tomb of Becket, and indeed came away blessed. I just had to see it again.

The story of Thomas Becket is an interesting one, in part because he was venerated as a saint and a martyr by both the Catholic Church and the Anglican Communion. It is also interesting because of the close friendship between Becket and King Henry II, a friendship that in the end did not last. One must be careful of what one says, when one is a King. It is said that King Henry, in his frustration (and for a variety of reasons) , said, "Who will rid me of this troublesome priest?" or words to that effect. Four of his knights took these words and decided to carry out the implied order, assassinating Becket. There is so much more to the story than time and space permit. But you can learn all about it here.

I joined the cathedral tour, which was splendid and given by a terrifically knowledgeable man who enjoyed it as much as the tourists did. His descriptions were so vivid that they made us feel almost as if the tragedy was happening now, rather than the year 1170. Becket was buried in Canterbury Cathedral until King Henry VIII decided he did not want Becket to be memorialized there. His remains were (we were told) removed and to this day, no one knows where they are.

After visiting the cathedral, I wandered around the town of Canterbury, seeking lunch. It is a darling town! I finally decided upon the humble cheese-tomato baguette, with a pot of tea, all of which cost far too much but couldn't be helped. One must eat, after all. And then all too soon it was time to dash off in my train, and walk in on yet another marvelous dinner, made by my hostess. Chicken Thai this time! Delicious. 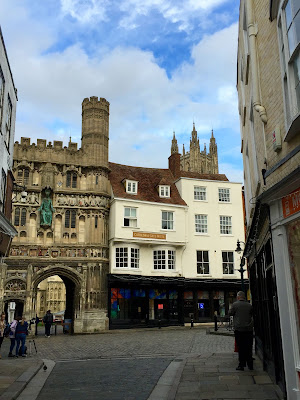 The only trouble with seeing all of these fabulous cathedrals is keeping them all straight. I really do not think I can (AND I forgot to ask where the Bishop's Seat is! I was so taken by the stories that I clean forgot..).

But I have seen it on Google Images and you should too! And I will be sure and ask about the Bishop's Seat tomorrow on my next Cathedral tour. Just wait till you hear about that one.

You come around a bend, and see the cathedral peeking out above this building 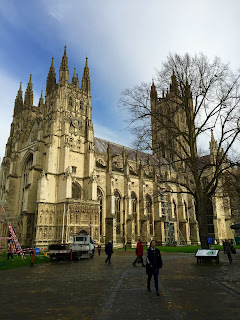 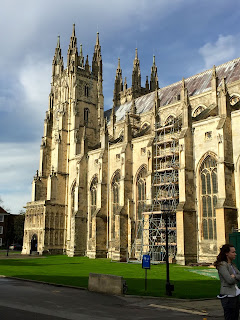