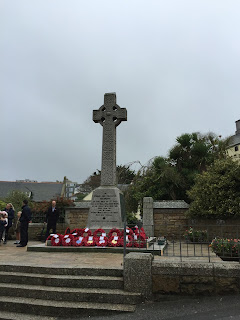 The startling thing was that I did not know it was Remembrance Day. Poppies had been in various shops these past few days, and I had noticed them. They had been attached to the lapels of just about everyone who came inside the church this morning. But it wasn't until I heard the sermon that the penny dropped.

We, together, were reminded thoroughly of those who had laid down their lives in service of their country. The sermon and the songs commemorated their great sacrifice, and then we were all invited to step out to the war memorial, where it looked like the entire town had gathered. Two worthy bobbies stood along the street, directing traffic. There were the splendid St Johns Ambulance, dressed all in black and holding their flags high. There were children everywhere, each facing the cross with their red poppy on a lapel; and then, best of all, was the band. 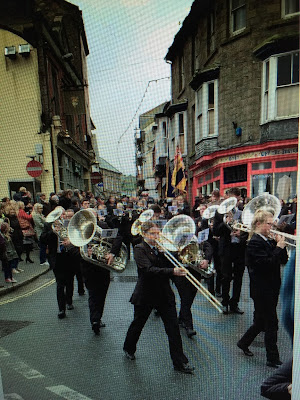 Down the street they marched, playing their brasses with great and solemn meaning. They played all during the laying of the wreaths as the flags were lowered to the ground, in mourning. And for very good reason just then, there was hardly a dry eye. Men whose sons had not come back from recent conflicts, bowing to lay the red wreath at the foot of the memorial; children whose fathers or mothers were still missing, holding the hands of kindly escorts; women whose husbands had served, and had died. All of them lined up to bow and to pray and to thank.

It was blowing a gale but nobody noticed. Raining, but who cared? All eyes and minds were on one spot - the war memorial that had stood in St Ives since the end of the Great War. The War to end all Wars. World War One. The memorial that says, Lest We Forget, in the hopes that men might cease their wars and live in peace.

My father would have loved being there today. He had been to numerous American Veterans Day commemorations over his lifetime, having served in World War Two. He had recited the poem, In Flanders Fields, over and over again at these services, standing proud and reading clearly.


by John McCrae, May 1915
In Flanders' fields the poppies blow
Between the crosses, row on row,
That mark our place; and in the sky
The larks, still bravely singing, fly
Scarce heard amid the guns below.
We are the Dead. Short days ago
We lived, felt dawn, saw sunset glow,
Loved and were loved, and now we lie
In Flanders fields.
Take up our quarrel with the foe:
To you from failing hands we throw
The torch; be yours to hold it high.
If ye break faith with us who die
We shall not sleep, though poppies grow
In Flanders' fields.
And, my friends, how do men finally cease their wars, and live in peace? When Christ is their Peace.

See you along the Way,
the SconeLady 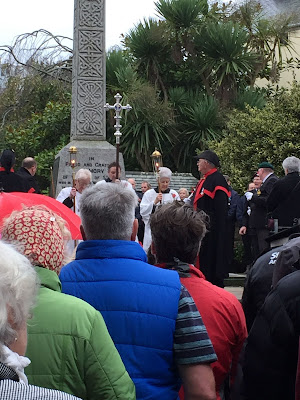 Posted by SconeLady at 3:06 PM