I awoke to the very good news that my host, in Paris, was safely headed home. Finding oneself in Paris, France, on a night like Friday night would have been frightening, to say the least of it. But he, praise the Lord, came through. A wonderful thing! We followed his progress all along his way, reading his texts, from hotel to Metro, to railway station, to Eurostar, to the Underground, to a final train, and then home. As he made his slow way here, we were on the streets in London, walking in rain, to the Ai WeiWei exhibition at the Royal Academy of Arts. 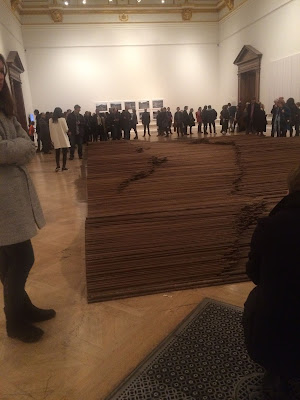 It was fascinating and really should not be missed (although I think Ted must have missed it, because when we gathered at the end he said he had been out shopping in three stores!). Weiwei is a Chinese Contemporary artist and activist whose art most certainly does not come in frames. It is situated throughout the Royal Academy inside its massive rooms, in astonishing shapes and sizes. Almost everything we saw became my 'instant favorite', such as this collection of steel rods which came out of the dreadful 2008 earthquake in China. Thousands of children had died in the quake, due to faulty construction of their schools. The rods were taken from the rubble of those schools, straightened, and placed into this display to depict the ending of young lives in mid stream. (I am not describing it very well, but do look it up). All of the names of the children who perished are listed along the walls of one of the huge rooms. It was magnificent (although not a good photograph of mine).

But you can see your own photos by checking out his art here.

And then it was time to say goodbye to friend Rosie, and her Ted. I do not like saying goodbye to friend Rosie and her Ted, ever. So while we stood pitifully contending with this next goodbye for probably a year, Rosie piped up. "I'll come back down! We'll get together again in London before you go!" And so we have wonderfully delayed our despair by a few days. Haha! Excellent.

And so my hostess and I walked home along the shining streets of London, discussing any number of fascinating subjects. You see, my hostess is uniquely interesting. She is the sister-of-friend-Rosie and I think their mother must have been spectacular, really I do. Look what she produced.

And her favorite moment of the day, barring none, was opening their door to find her good husband standing on the stoop, safely home, from Paris.


(P.S. Sir Trevor was waiting for us too. In all his glory.) 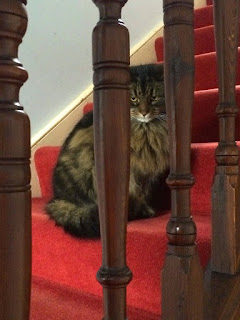