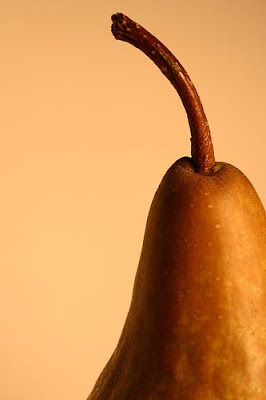 
If you haven't been there yet, you should definitely make it happen.

For us it was a snap decision. We would drive from Central Oregon to the state Capital, and eat lunch at The Wild Pear! It was on the way to where we were going, sort of. And it had only recently been renovated so I dearly wanted to see its new digs. We could maybe meet the kindly bro-in-law+lovely wife there, making it a foursome. We invited, and they said yes. Brilliant! It was they who had first introduced me to this spot, and so meeting them there was fitting.

Getting to The Wild Pear was a snap. Siri alternately guided and bullied us to the left and to the right until - there it was, perched on the right just past a surprisingly empty parking space - which we instantly snagged before anyone else could. 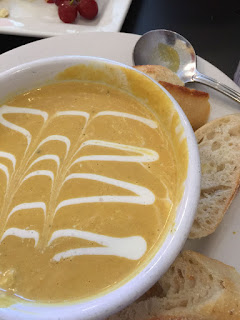 Soon our guests appeared, and together we perused the menu. This took some time, because obviously everything in it is smashing and delicious and who can ever decide? You have got to check out their menu items, here. It has everything from their signature pizzas to fresh soups, salads, hot entrees, sandwiches and wraps, all fresh from the fruit and vegetable gardens of greenest Oregon. Oh - and desserts. You can't forget the desserts...if ever there is still room for them after all the deliciousness.

I meant to get the Lobster and Seafood Melt, but simply had to order the soup instead. This is because their soup is undeniably the best, most tasty soup in any restaurant I've been to, and there would never be room for both. I chose the Coconut Curry Butternut Squash Soup. I couldn't resist it, along with the 'Imported Cheeses and Fresh Fruit with Baguette'. The fruit consisted of red grapes, strawberries, blueberries and - one other thing I can't remember. The cheeses were brie, sweet cheddar and smoked provolone. The sweet cheddar was especially amazing and by the end of it, I was edging toward uncomfortably full.

Mother had their quiche+cup-of-soup, which was so good (she having given me a lovely bite) that I wished I'd ordered it too. You can see it below: 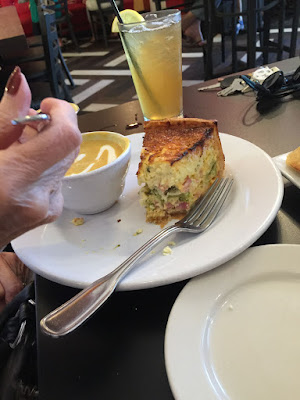 Also on our table was the Turkey Club Sandwich (bro-in-law) and a salad with their special curried pasta (lovely sister-in-law). It was all fabulous and no one could possibly consider the dessert options, although sorely tempted by the Oregon Mixed Berry Cobbler - which looked superb.

As grand as the food was, I have to say that the company was even better - ideal, in fact. It was the perfect place for talking, and laughing, and gazing around at the lovely year-long renovations they had done. It had been a lonely year without The Wild Pear, especially for the Salem residents who had come to rely on its constantly delicious offerings.

But they are back, and you must go see them. Check it out for yourself, and see if I have this right. When it comes to food, the SconeLady generally does.

(a side note: The Wild Pear does catering, too, and you just won't believe the choices you will see on their catering menu, here!)