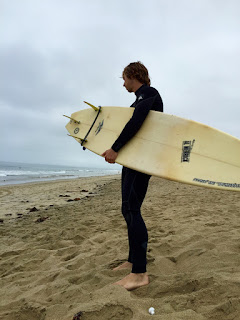 "Ok, so let's meet at the north side of the Huntington Beach Pier, 8 am!" texted the rather stunning (surfing) son. "The waves are supposed to be decent by then."

So we got up early, packed some food and headed out, down the 91. It was a debut, of sorts. The recovered fractured collar bone, damaged during a high energy basketball game, was healed and ready for business at last. And we were keen to watch. 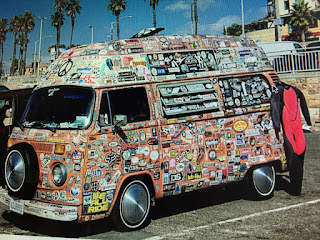 We found Huntington Beach charming as we drove slowly north on the CA-1. It was clean; quaint; filled with small shops just crying out to the SconeLady as she passed. And we came across the most amazing VW Bus simply plastered with stickers (I guess you would call them that). And hovering near the Bus was an elder surfer, utterly gracious, who may have been surfing and busing for ages. He spoke with The Rather Stunning in a friendly way, something about being 'too tired to climb a wave just now'. He opened up the rear door as we passed, and I saw the beautiful insides of that Bus. Woa! Almost a palace, in there. In the end, we concluded that he probably lives in it and surfs whenever the mood strikes.

It would have been fun to hear more, but we had other things to do, our own surfer to watch - and he climbed atop wave after wave, getting his bearings and making up for lost time.


But eventually even the youngest most energetic of surfers will get tired or hungry, or both. So we gathered our belongings and went in search of a breakfast worthy of all that energy. What we came upon was the unexpected presence of a B.J.'s restaurant that actually served breakfast. We did not know B.J.'s restaurants served breakfast and were very excited about it. We found a table outside, and settled in. 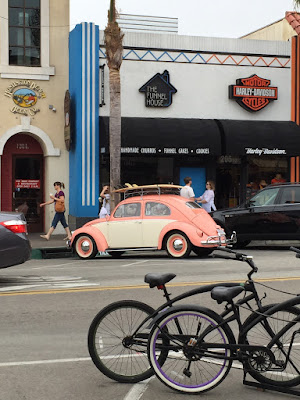 Would you like to know what we ordered? (I always tell). Mine was the California Scramble, complete with eggs, roasted vegetables, cheese, country potatoes and sausage, with sourdough toast. Coffee. Of course. The rather stunning and his father had the 'short stack', and some sausage. All delicious, all satisfying. And the conversation was even better.

And just as we left, the cutest little VW Bug pulled in to a parking space just across the street. I probably don't need to tell you that I have never, ever, seen anything so cute where we live. Nor a VW Bus plastered with retro stickers and amazing inner decor, either. Clearly Huntington Beach is the place to be, on a weekend, with mild California weather and two kind men, one on either side of the SconeLady.

That's my very own personal version of Bliss.

Posted by SconeLady at 6:30 PM