I just couldn't stop thinking about it last night.

Emily Blunt, as I was saying to you, grabbed our attention as the impatient, the irritable, the testy first assistant to Miranda Priestly in The Devil Wears Prada. For those of us who don't think over-much about fashion, the whole thing was an unexpected look-in at a world which carries on, apparently, without most of us.

It was a fun movie! and I liked everyone in it. Meryl Streep, the boss whose "That's all.." was the ultimate dismissal, was funny and splendid. But I just could not get over those shoes..

There came a moment when Andy knew she had won the boss's heart. Or, if not her heart, at least her recognition. I don't know that it always takes buying a new outfit or wearing spiked heels. Sometimes it's easier than that but for Andy, the penny finally dropped and on went the spikes. 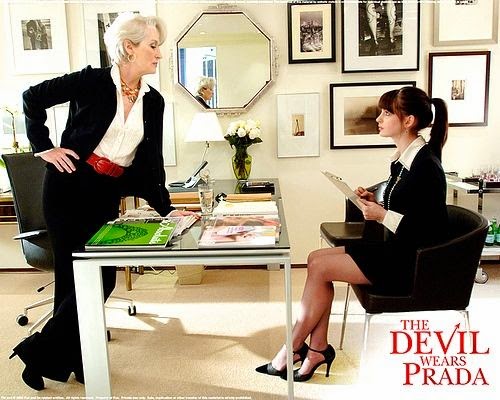 At first I felt betrayed that our girl-next-door gave away her hideous skirt, her ... (oh by the way men, if you don't know what we are talking about, it's ok if you just sort of fade out for a minute or two) ... her clunky sweater and her appalling flats. I thought, "But I LIKED her that way! I thought the sweater was OK even if the skirt WAS hideous, and anyway there was too much makeup around there.."
But then as soon as Andy sauntered out of the dressing area with (do you REMEMBER?!) the most adorable New York-ey slenderizing outfit - black mini skirt with long black coat, tall spiky black boots with tights and suddenly awesome hair - I was drawn IN. Didn't ever want to see the clunky sweater again. 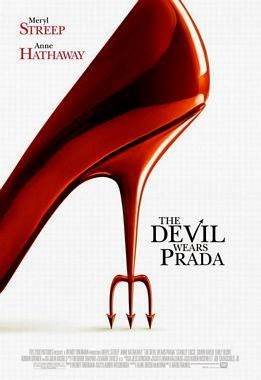 Ladies: (men, go back to sleep for just a moment or two longer): spikes. What do YOU think of them? I think spikes are horrible and dangerous and might be the end of the women who wear them. How do their feet survive? At the same time, they are so lovely and fashionable that any photo of them on any foot makes the hapless viewer want them. Even the scary red photo on this page has its tug on my attention. But the SconeLady must look at such things from afar, for fear she will lurch embarrassingly into traffic and injure herself.  We can't have that.
https://www.flickr.com/photos/kmar/378190989/

And so dear Readers, you must, soon, grab the DVD and see what happens in the end. It will help take your mind off the scary news of the Middle East, the unexpected struggles in eastern Europe, and all the awful pre pre-election shouting.

Just pop in the disc, lie back, and be entertained.