In a small home town such as ours, everyone seems to know everyone else. The parents especially know everyone else. I know this because it never worked for us to tell Mother that "everybody is going" somewhere. I can't think of even one time this was effective. The first thing she would do upon hearing such a claim, was to pick up the phone and call "everybody's" mothers. Then we knew we were 'had'. The mothers would all agree that NONE OF US WOULD BE GOING. 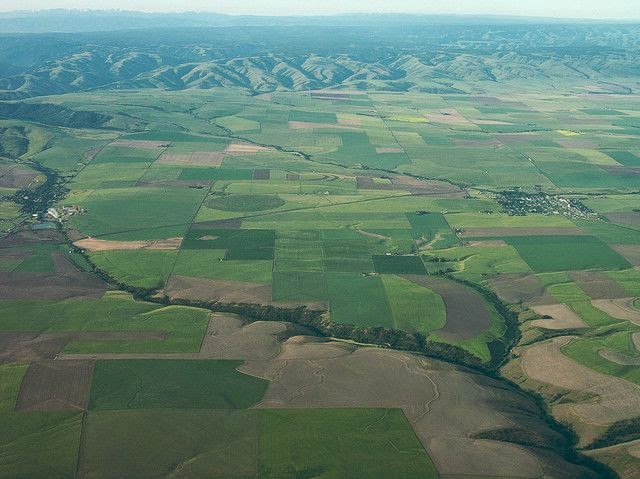 Because they all knew each other, there was a level of trust. I don't mean to sound naive here, but because of this I could go to Ralph's house up the street and have a milkshake. He made the very best chocolaty ones in his little kitchen that resembled a 50's diner. Having one was a high treat. Ralph was the ultimate purveyor of both milkshakes and kindness, listening to any small child-talk I might have. It would have been horribly sad if the level of trust were not there, between Mother and Ralph. I don't suppose little girls can go up the street like that, now. It certainly was a different time.

You can see our home town, in this photo. There we were, surrounded by amazing fields, farmers doing their magic with the land, and the Blue Mountains in the near distance. I felt we were protected there, mostly; the outside world sort of sped on while we picked strawberries, played Kick the Can and went for bike hikes miles away. On fine days, we wouldn't see the inside of our houses until dinnertime. Sweet!

There weren't any video games, and I feel fairly sure that Mother would not have approved of them. Not when the entire out-of-doors awaited one. No, laying around with one's head bent toward a remote and a screen was not our parent's idea of 'useful'.

Why does the SconeLady think about these things now? It is because I am going back there. Gathering with the people who grew up with me, sat in classes with me, did the crazy things kids do, with me. There were only 22 in our graduating class, and some of them will make their way toward that little place that almost no one has heard of.

But we have. I have said before that it was sort of like growing up in Mayberry. There is a little song I remember from that television show, which I think of as my own:

My home town, there's no greater place I know.
Where the neighbors I find are gentle and kind,
And the livin's easy and slow.

My home town, there's no greater place to be,
Where the worries are small, and the kids grow tall
And strong, and healthy and free.
My home town, my home town,
Mayberry, Mayberry.

Of course this is a nostalgic post, it can't be helped! We, they, weren't perfect by any stretch. But to keep things simple, it was a sweet childhood. We can't go back, but we can remember. And that is what I shall be doing.