The sky was bright and the air warm as we approached the final city of my long trek. Carson City, the capital of Nevada and the target of all my travels, lay just before us. The Greyhound bus was so warm that passengers practically gasped for breath but were not allowed to open their windows (what is the purpose of a window if not to open it? I ask you). 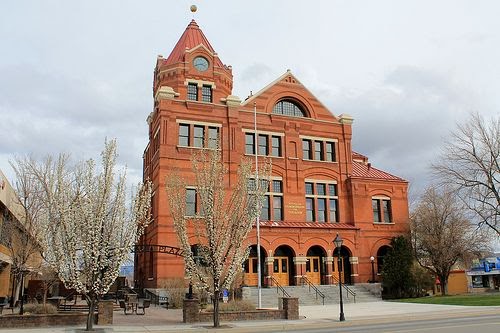 But the driver was relentless and said it was NOT his fault that the air conditioning was NOT working. He said that for safety reasons we would NOT be permitted to open any windows (he had an electric fan blasting away at his head, I noticed). I think if we had had to go very much further like this, there almost certainly would have been a mutiny. 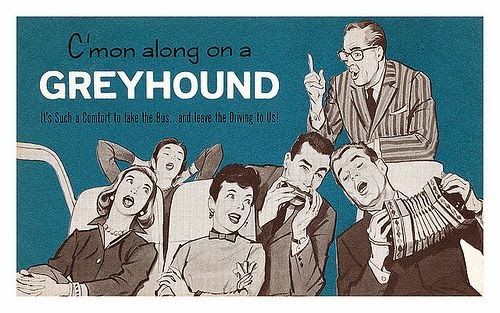 But I wasn't thinking of mutiny. My mind was filled with visions of the Lady who would be at home waiting for me. She would either be on the front porch step or looking through the picture window so as not to miss the moment of my arrival.


The bus drew in to the terminal and parked itself under the bus portal roof, and  desperate passengers lined the aisles in order to make their escape. We were still gasping for breath (had I mentioned the 'troublesome' bathrooms one might have encountered along the way?..).

I peered through the window glass as we inched our way to the exit. There on the curb was my friendly and benevolent step-brother who had been dispatched to collect me. I made my way down the steps and practically collapsed into his welcoming arms, croaking out, "Let's get AWAY from here!".

We threw my things into the back, and made a swift getaway. This town, through my eyes, was just about the most beautiful place I'd ever seen. After all the big cities I had passed through, and the bus terminals that had given me such a fright, this one and this little city was a sight for my weary eyes.

We turned down Highland Street and there, a tall and beautiful Lady stood facing our direction. At 49, she appeared even younger; more like a big sister than a mother. She stood there in the sun, a dish towel drying her hands (she had been undergoing a flurry of food preparation!). Everything having to do with food and feeding in that family required flurries of prep, so many were we. But this feast was particularly special, because someone was back in the fold and this would be celebrated.

My small sister came flying out of the house, barreling down into my arms. We stood locked together and thankful, yet not needing to say very much. Other little sisters and bigger brothers hovered to hug whenever a hug was available. Newer father grinned and said something like, "Well it's about time.."

Finally we all trooped into the house for a meal that was more feast than supper, talking long into the night about everything that had happened, and would happen.

For plans needed making! An application required filling! and everything from clothing to housing, travel (again!?) and majors had to be thought through.

And there was not a moment to loose.

Posted by SconeLady at 7:42 PM