It's hard to believe, dear Readers, but my calendar confirms it. Tomorrow, June 18, 2017, we will have been married 40 years. And what a gift it has been!

I have to laugh just a bit because when I was a much younger wife, an 'elderly' couple stood up in church to announce that were celebrating their 40th anniversary. I and my friends all thought that they were hopelessly old! We were in awe of all those years, and now, just look. It's happening to me! And I am blessed - not at all 'hopeless'. 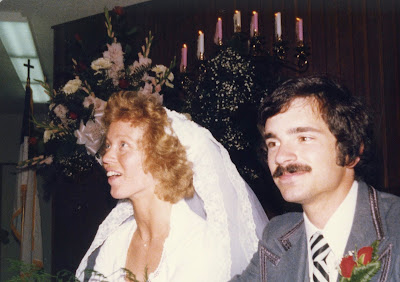 When we were just starting out, one day the subject of marriage came up at work in the teacher's lounge. I said something about planning to stay married to my husband 'till death do us part'. Like the marriage vows, you know? My boss scoffed at what he called a 'naive' goal, saying, "You can't know that."

"I don't see how anyone can know that they will stay married. It's ridiculous."

"All the same, it is a part of the marriage vow," I continued, as respectfully as I could. He was my boss, after all.

"Did you say that vow when you got married?" I was genuinely interested in his answer.

"Well, that was a Vow. A promise to be kept. All I am saying is that I mean to keep it, through God's strength."

Over the next several days that conversation played itself over and over to me, and a song sprang up out of me in response. And here it is.


In a time when marriage vows are said
With a thousand good intentions,
And the man and wife give promise to continue to the end,
But in the shadow of their minds, they know there
Just might come a day,
When they'll choose to say goodbye if things wrong.

I shall stay, I will stay with you,
And I'll see you through your young and elder years.
We will face the harder moments through our tears,
But I'll be here, I can't bear to miss one gray or golden year.
-copyright 1981, HeartSongs

I'm so happy to be at that magic number, now - 40. It has a nice ring to it! It has brought fun, and laughter, and knowledge of God, and children, and lovely in-laws, and grandchildren! plus myriads of other sweet things. And we've learned something about vows, too, along the way. The vows we make tend to keep us, as much as we keep them.

And so, Happy Anniversary, my darling. I love you, and it's been an honor. You are still the funniest man I know.