MooMaid for a Second Time


It was a naughty, naughty seagull.

I had been attacked by a naughty seagull only once before, ages ago, and was determined never to see it happen again. To prevent such aggression, I usually hold one hand over the ice cream while the other hand shoves it gleefully into my mouth. Today, though, I forgot the precautionary hand and while a nice man and woman were standing next to me enjoying the sunshine, wham!! the naughty seagull swooped from behind, caught the cone up into its lips (well, beak) and swallowed it entire. The three of us stood stunned.

"Oh aren't they AWFUL?!" exclaimed the woman, once she had recovered. 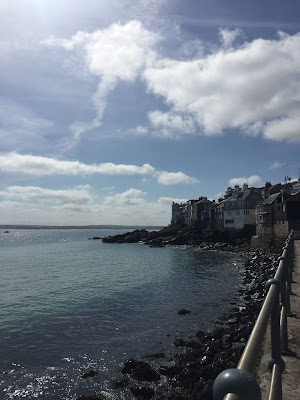 I mumbled something kindly in response, and turned around to go right straight back to the MooMaid counter for another. No way was I giving up that easily.

The MooMaid lady recognized me and said, "Uh-oh. Did something nasty happen to your Dark Chocolate Sorbet?" She, of course, had guessed the worst.

"It did! I can't believe their horridness! I'm going to buy another."

We sorted the other, and as she handed it to me she shook her head and advised, "Best to sit inside, Miss, you'll eat more of it that way."

There is an outdoor sheltered area that is safe from the evil ones, and so there I sat. It was ok, because one is protected from dive bombers there. But it takes the joy out of the whole ice cream eating experience because you are not out in the sunshine, and this means that They have won.

I don't like it when They win. They obviously have not learned mannerly behavior from their mothers and don't deserve to win.

It is an age old story that, sadly, will never end. No one will ever put a stop to it because it cannot be stopped. After his little sister had endured two naughty seagull attacks, the 9-year-old said, "Grandma, why don't they call Animal Control to come down here and take care of this?" It was quite a reasonable plan, and I wished I'd thought of it.


The most despised creature in St Ives 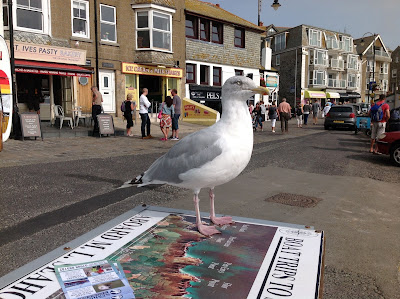 "Well, possibly they don't call Animal Control because there are millions of seagulls and only a few thousand people. The thing is impossible."

After further discussion, we decided that this is one of the things about which something really ought to be done. Death, and taxes are two more of these. So, any ideas, people? Hmm? Surely somebody out there can think of something. Else, I'm calling in Animal Control.