Parking spots are terribly hard to come by in St Ives, and people wait simply ages for them. Some of the more competitive ones even try to run to an empty spot and stand there, guarding it against anyone with an actual car. This does not go well. Friend Rosie and her Ted had come upon this lack of a space, until they saw a man carrying his keys. Seeing a man carrying his keys in a parking lot in St Ives is a good omen. Ted asked the man with the keys, "Are you leaving?" or words to that effect, and received in return a friendly thumbs up. 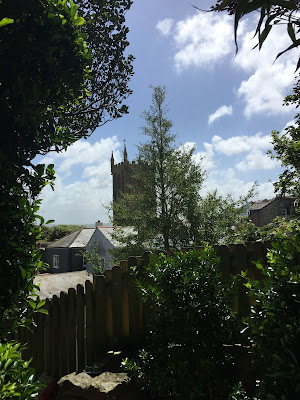 We all knew that moving the car to go to a tin mine could mean an irretrievable loss of parking. But friend Rosie had found just the right tin mine to visit and we all wanted to go, parking or no parking. So up the lane we stepped, following Ted's head.

The only trouble so far seemed to be that the wind was blowing a gale upon us. One of our party was nearly taken off by it, rather like Dorothy and her 'Over the Rainbow' house. Such a squall it was! But we soon found ourselves inside the 'Dry' part of the mine, warm and toasty and seeing the mine as it was for all the years it was in use. Everywhere there were signs of the miners: their lockers, their work clothes, their boots, their toilets, and their photographs. They looked just like any modern man might look, with a hard hat and a coat. In fact, one young and handsome miner's picture looked just exactly like a man I know well - the Rather Stunning Son! It was astonishing, and I was astonished. Imagine my surprise when I turned a corner and saw this:

Rather Stunning Son, double (minus the cigarette) 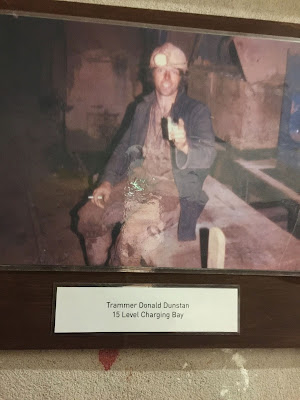 I stared at that photograph, and wanted to go on staring at it a whole lot longer but couldn't, because a nice elder gentleman was beckoning to us. "Right this way, ladies and gentlemen," he said. "Please stay together because I'm 'bout to take you 'down the mine'."

He is a Cornish miner, bless his heart, and believe me his accent was good and stiff. I'd heard it before, but never found the key to interpreting it. Still, I worked away at it like a man, as we made our way toward the entrance. 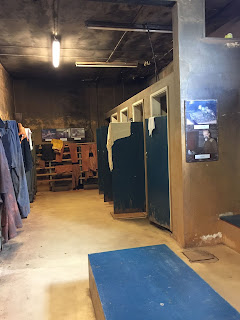 We walked and walked, soon finding ourselves underneath tons of granite and damp and slippery cobblestones, in the dark, with no prospect of ever being found if something happened. To take our minds off of these dire thoughts, the man told us how it felt to be a miner back in the day. He loved it, and when the mines had to close up shop, he was let go, and worked as a fisherman for 20 years. He did not love that. A miner is a miner, wherever else you might put him, and his life was a 'misery', until he was given this job as a guide in his old mine. His smile never leaves his face, now. It's the sweetest thing.

As we got ready to leave him, our guide saw Ted holding his hard hat, and shook his head. "I'd put that hat back on if I were you, Sonny - them seagulls are likely to go crapping right on your head."

That's what I liked about our miner that day. He was plain speaking - if you can call the Cornish accent 'plain'. I'm sure I can't.