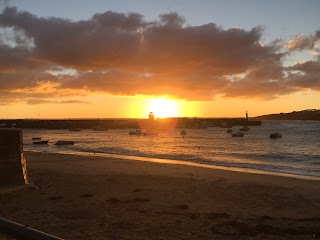 Sunday is always a spectacular day, whether it be rain or shine. This day it was shine, so one could not help but dash out and be in it. And then there was a toast party, and then - church! It would be our last visit to St Ia this year, so we were certain to be there on time seated in our ancient pew like all good parishioners.

This time we were bowled over by the organist, who is as good as any I have heard in a Cathedral. Including St Paul's, London. It made me a bit sad to realize (again) that I do not even know of any organists, anywhere near where we live in California. I'm sure they must exist, but I never run across them or hear of them. This one, whose name is Peter, is splendid. And, he is a Choir Master as well, directing everything from his perch at the massive organ, playing all of the parts including the foot pedals, changing organ sounds as befits the music. He directs the choir from there as well. I don't know how he does this, but he never misses any notes while using an arm to direct the beginning or the ending of a piece. Heaven.

After church everyone was invited for tea or coffee and biscuits, so of course we stayed. I like the biscuit part because they always have my favorite 'Rich Tea Biscuits', which taste smashing with a nice hot cup (two biscuits is just perfect with one cup). While we stood chatting away, someone spoke to us about the choir and the organist and how there was an American woman in the choir today.

"Yes," said the woman telling us. "She is right around that corner, there."

And around that corner came the American. Within moments I realized I was being introduced to a kindred spirit. It was obvious, dear Readers, because it was revealed that she travels to St Ives every year for THREE MONTHS. On her own. Nobody but me ever does such radical things. She comes during the late fall and stays until February, which (to me) is a very cold time to come stay. But she doesn't mind it. She says she escapes the greater cold of Kansas by coming to St Ives. 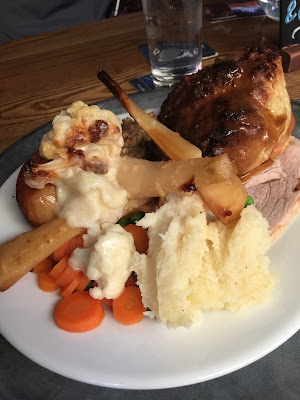 There was so much to discuss! What kind of lodging do you use? Where do you eat? What do you do? Everything, in fact, that I am asked whenever someone discovers what it is that I do every fall. But - now the coffee, tea and biscuits were being packed away and the church was emptying. No time to talk! So an arrangement was made to meet the next day at the Digey Food Room, as she had never yet been there! We would meet, and talk. This kindred spirit would discover the best scone in Cornwall, and I could hardly wait.

I thought about it as we walked back to the cottage, and then as we went to the Sunday Carvery at the Castle Inn (you can see the ridiculously huge amount I took, there>). I thought about it as the rains came tumbling down outside all afternoon long. It would be lovely to speak to someone who felt the same about this gem of a Cornish town.

In the meantime, I must tell you the list of tasty foods on offer at the Sunday Carvery:

Are you shocked? Well, I didn't finish it, but I certainly did give it the old college try.