We are entering our last week in St Ives, and must therefore squeeze in as many cream teas as possible. Having fairly well given up on anyone else's, it's got to be The Digey so we headed in, through the rain. The place was hopping. There were people and kids and prams everywhere, but we managed to squeeze ourselves over to a tiny table at the back. Ordered. Were brought our tasties. And then settled in to watch. It is the SconeLady's favorite pastime. But once in a while she sees something she wishes she hadn't. 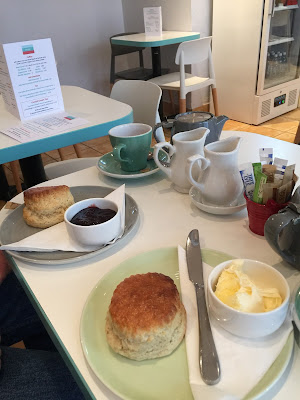 One tiny girl was standing, hovering, between two tables and looking solemnly in my direction. I wasn't sure which adult she belonged to but thought she was utterly sweet and so I said, "Hello! How are you today?" at which she promptly cried. I must be losing my touch.

Or perhaps it was the accent that scared her. We Americans can be frightening if you don't watch our movies and feel familiar with us. She was heartbroken for a time as her father put down his paper and comforted her. When she was happier she began wandering quietly from table to table, and ended up standing in front of the door. I do not like to talk about this part, because standing in front of a door is not a good idea when people, who do not know a tiny girl is there, may be opening it from the outside. "Oh dear, someone is going to open that door.." I murmured to my husband.

And in hardly any time at all, someone from outside did open it! I wished so badly that I had said something in time, but - what would you have done? People do not like people to interfere or lecture them in public about their children. The girl did fall and did cry, but was, in the end, comforted and calmed once again. But it was awfully hard to watch. It is as though the thing was happening in slow motion and we were unable to stop it.

I don't really know how to end this one, except to say that I won't forget that sweet and tiny girl, whose only mistake was to stand in the wrong spot in a restaurant. The real mistakes were made by the one person who was supposed to have been doing something much more important than reading his paper.

See you along the way,
the SconeLady
Posted by SconeLady at 1:19 PM